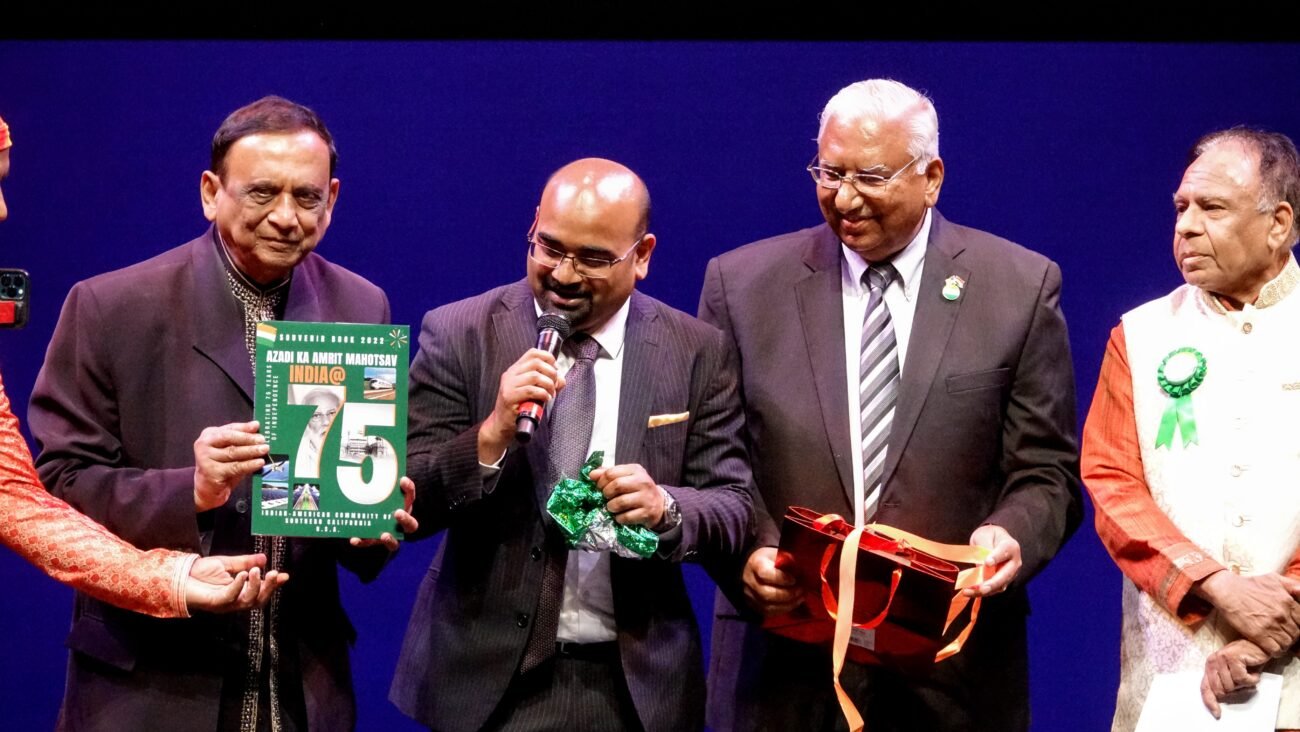 CERRITOS, CA – The Indian American community of Southern California under the banner of INDIA@75 celebrated the 75th Anniversary of India’s Independence on August 6, at the Cerritos Center for the Performing Arts Theater.

After India’s Prime Minister, Narendra Modi called for the celebration for 75 weeks to mark the historic anniversary, the Indian Mission in San Francisco sent out a directive to the community to act on the call and organize celebrations at various locations.

At a meeting of various Southland associations the committee was formed with Kewal Kanda as Chairman, Charu Shivkumar as Treasurer, Harkishan Vasa as Secretary and Yatri Shukla as Joint Secretary. 45 people came together and worked for 15 months. The celebration on August 6 was the culminating event of several events that were run by the India@75 Committee.

The first event was successfully held on August 14, 2021 at the Joy of Sharing Community Center in Norwalk while the second event was a celebration of  India’s Republic Day on January 22, 2022 in Cerritos graced by the presence of Consul General of India in San Francisco, T.V. Nagendra Prasad. The series of events held by the committee was also a celebration of India in May this year in the Inland Empire under the leadership of Venkat Peddi, president of GOPIO-IE.

The Deputy Consul General of India, Rajesh Naik, who Kanda described as a friend of the community, pointed to the growth of India, saying the nation come a long way to the point where it is now easily recognized on the world map. It wasn’t the case a couple of decades earlier. Naik released a coffee table hardcover souvenir of 190 pages containing profiles of many committee members, community entrepreneurs, and Indian history. The book was spearheaded by Hasmukh Modi, Kanda, Ramesh Thalli, and Harkishan Vasa.

Hasmukh Modi, Vasa, Gunjan Bagla, and a group of young students led by Jasmin Sivakumaran presented a Vibrant India segment charting India’s progress since independence the possibility of becoming a superpower by the year 2050, as well as how 5 million strong NRIs in the USA are helping millions of people in India with their social programs and charitable efforts.

The cultural segment led by Yatri Shukla and Suma Hareesh showcased the diversity of India. Many state cultures were presented through their unique dances with backdrops displaying the landscape of that state. Dances such as Divdi, Kathak, Bhangra, Karnataka Vaibhav, and dramas like ‘Azadi Aasan Nahi Thi,’ were applauded tremendously by the audience. A sparkling fashion show by Priya Kumar and Nandini Ratti was another highlight of the night.

Rahul Kapoor Jain, a motivational speaker talked about Un-Stoppable India and pumped enthusiasm in the audience. With his powerful speech, he energized everyone and received a long thunderous applause.

The grand finale had all the performers on stage dancing together while holding Indian and US flags. The program ended with slogans of Bharat Mata ki Jai and Vande Mataram. A sumptuous food including Jain food was served to all by RT Kitchen of Norwalk, California.

The emcees of the event were Charu Shivakumar, Rachna Srivastava. Event Coordinator Ashok Patnaik also did some of the introductions.The tech team directed by Ramesh Thalli ensured a smooth presentation throughout the event.