HomeIndiaIndia and the worldStudents from India Who Took Covaxin or Sputnik Asked to Get Revaccinated Before Entering U.S. Colleges 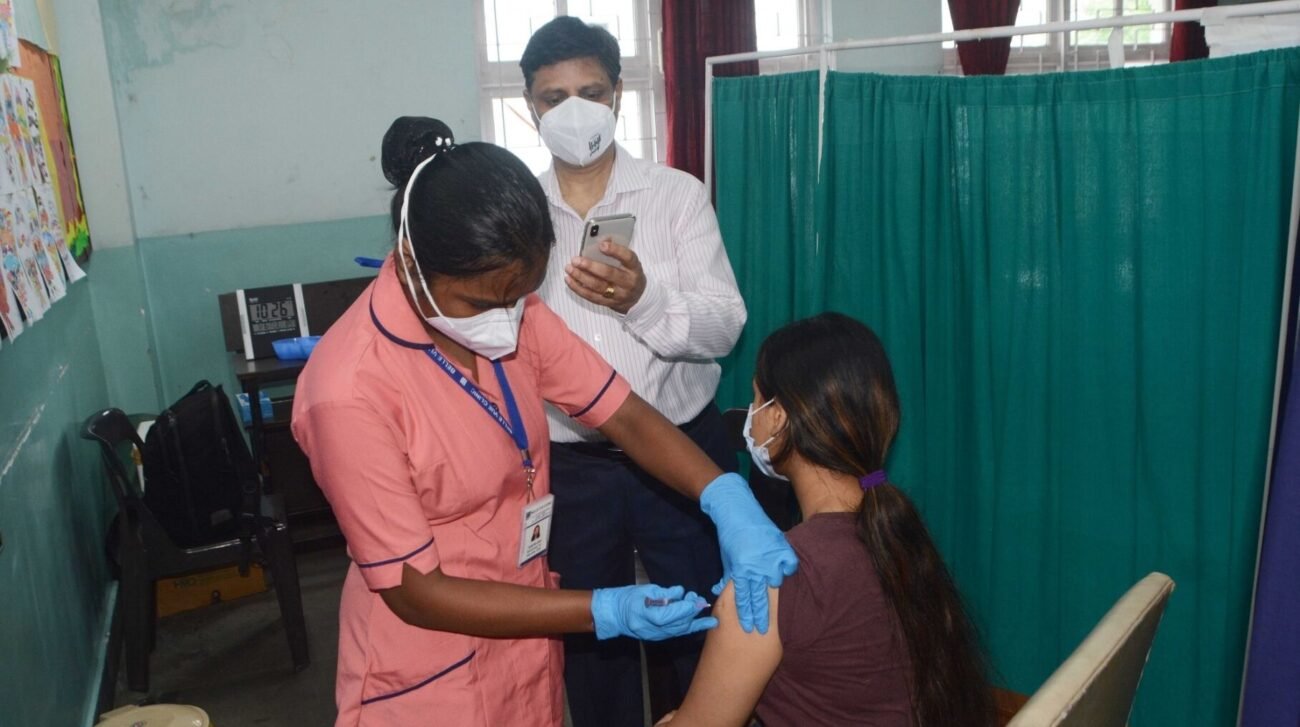 Kolkata health workers administer the Covid-19 vaccine. Indian students planning on attending U.S. universities who have been inoculated with India’s indigenous Covaxin or the Russian-made Sputnik V are being asked to revaccinate as these vaccines have not yet been approved by the World Health Organization. (Kuntal Chakrabarty/ IANS photo)

WASHINGTON — Since this March, over 400 U.S. colleges and universities have announced students should get Covid-19 vaccinations, ahead of the fall semester, but those who have been inoculated with India’s indigenous Covaxin or the Russian-made Sputnik V are being asked to revaccinate as these vaccines have not yet been approved by the World Health Organization.

Rukmini Callimachi reports in the The New York Times that Milloni Doshi, a 25-year-old student from India, who is due to start her master’s degree this fall at Columbia University’s School of International and Public Affairs, has been administered two doses of Covaxin. Now, Columbia has told her that she will need to be revaccinated with a different vaccine once she arrives on campus.

“I am just concerned about taking two different vaccines. They said the application process would be the toughest part of the cycle, but it’s really been all of this that has been uncertain and anxiety-inducing,” Doshi wrote via a messaging app.

Campuses are proposing different measures, out of which the more complicated scenario is if students received a vaccine that has not been approved by the WHO, like Sputnik or Covaxin. Many colleges are proposing that those students will need to be revaccinated, which presents both medical and logistical conundrums.

This is primarily because no data exists on whether combing vaccines from different companies is safe. “Since Covid-19 vaccines are not interchangeable, the safety and effectiveness of receiving two different Covid-19 vaccines have not been studied,” said Kristen Nordlund, spokesperson for the Centers for Disease Control and Prevention.

Nordlund also advised that people vaccinated outside the U.S. with a vaccine not authorized by WHO should wait for a minimum of 28 days before taking the first dose of one of the Food and Drug Administration-sanctioned vaccines.

American students have access to the Pfizer, Moderna and Johnson & Johnson vaccines, three of the eight doses authorized by the global health body. This disparity could hinder colleges that have made it a major priority to retain international students, who brought in close to $39 billion in tuition dollars in the year before the pandemic, according to an analysis.

“Universities want to enroll international students because they add diversity to the campus community — and they bring money. It’s why this has been a subject of intense discussion,” said Terry W Hartle, senior vice president at the American Council on Education.

According to The New York Times, the situation is particularly challenging for students from India, which sends around 200,000 international students to American colleges every year. It is becoming increasingly hard to secure an appointment for a vaccine that will be accepted by American campuses.

“Every day, we get 10 to 15 messages and inquiries, saying ‘What does this mean? How does this impact me?'” said Sudhanshu Kaushik, who runs the North American Association of Indian Students, which is working to help fellow students.

Indiana University’s vice president for international affairs, Hannah Buxbaum, said that the administrators of the institution are working overtime to answer the roughly 200 phone calls and 300 emails that are pouring in every day from the university’s roughly 6,000 students overseas.

“Ringing off the hook doesn’t begin to describe. There is no question that there is anxiety and concern among our international students,” she said.

Many universities are only accepting the students who have been vaccinated with a WHO-approved COVID-19 vaccine. At Columbia, where one-third of the student body is from overseas, international students will be asked to present either their WHO booklet or a letter from a physician confirming they have received the requisite doses of one of the vaccines vetted by the world body, said Donna Lynne, the chief operating officer of the university’s medical center.

Callimachi wrote in The New York Times that those who will not succeed in securing a vaccine before the start of the fall semester are facing a potentially problematic process.

Many universities were vague on how they plan to deal with the logistical complexity of spacing out these unrelated vaccines, beyond saying that they planned to accommodate students undergoing this process, reports The New York Times.

At least six regional governments in India have announced emergency clinics in the past week to vaccine students going to U.S. universities, in the wake of mounting pressure from confused and anxious students, wrote Callimachi.

However, Hyderabad-based Bharat Biotech June 3 said that biopharmaceutical company Ocugen Inc. will have exclusive co-development, manufacturing, and commercialization rights of its COVID-19 vaccine Covaxin in Canada, in addition to its existing U.S. rights.