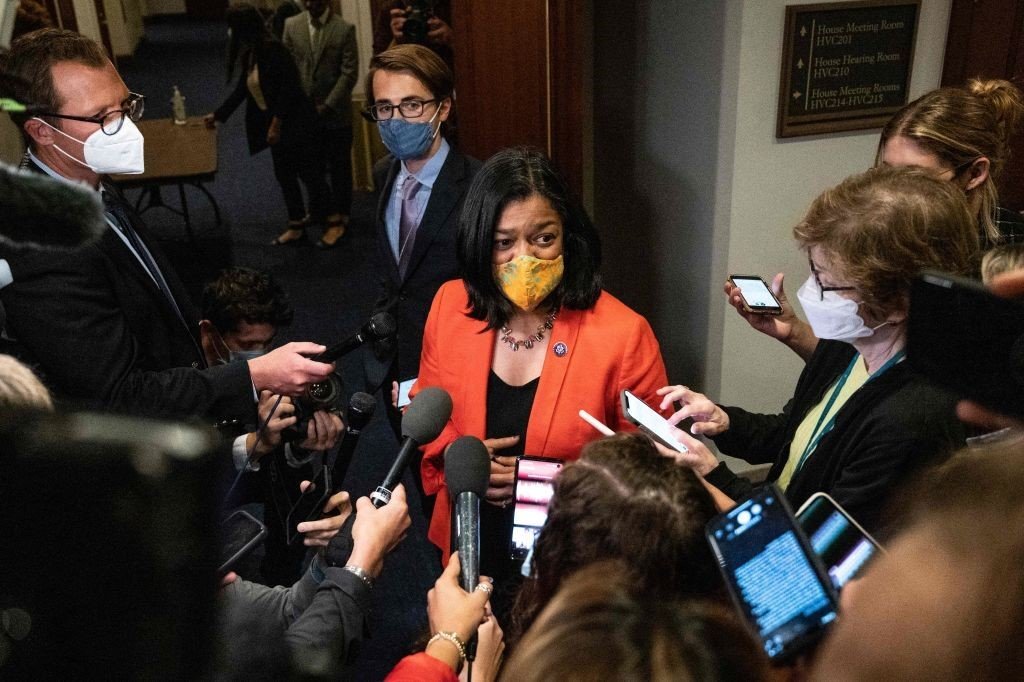 U.S. Representative Pramila Jayapal (D-WA) looks on as she speaks to the press after a meeting of the Democratic progressive caucus on Capitol Hill in Washington, DC on Oct. 1, 2021. In only her fifth year in Congress, the Indian American legislator is holding her growing caucus of liberals firmly together, marshaling influence that the left wing of the party hasn’t had in years. (Andrew Caballero-Reynolds/AFP via Getty Images)

WASHINGTON (AP) — Washington Rep. Pramila Jayapal, the head of the Congressional Progressive Caucus, says she has pushed President Joe Biden to hold the line and keep his ambitious social spending plan closer to $3 trillion instead of the $2 trillion range that he has floated to Democrats in recent days.

Jayapal told The Associated Press in an interview Oct. 7 that she had told Biden that his suggestion for compromise was “too low, and I said that I would really like to be closer to three.” The original amount for the package of Democratic initiatives, including expanded child care, health care, education and environmental programs, was $3.5 trillion.

The Washington state Democrat has emerged as a top negotiator in the talks on Capitol Hill, using the clout of her liberal caucus — and its nearly 100 members — to thwart a group of House moderates who demanded a vote last week on a $1 trillion infrastructure bill.

Biden tacitly endorsed the progressive caucus’s strategy last week, insisting that the spending package full of longtime Democratic priorities be linked to infrastructure. But he also floated trimming it back to a range between $1.9 trillion and $2.3 trillion, drawing pushback from Jayapal and others.

Jayapal said that the conversation is ongoing and she isn’t “drawing any red lines” in the negotiations. A White House spokesman declined to comment on any private conversations.

“The president knows” that progressives are pushing for the higher amount, Jayapal said. “I said it directly to him, I also said to his top aides, and we’re going to continue to figure out where we can go.”

In only her fifth year in Congress, Jayapal is holding her growing caucus of liberals firmly together, marshaling influence that the left wing of the party hasn’t had in years. In doing so, she is hoping to help Biden win passage of his agenda, which includes a slate of social programs that Democrats have desired for decades.

A small group of moderate House Democrats hoped to pass the bipartisan infrastructure bill alone and work on the social spending package later. But fearful that moderates would sink the larger bill, Jayapal and her members insisted that the two remain linked. House Speaker Nancy Pelosi abandoned a planned vote on the infrastructure measure after it became clear they lacked support to pass it.

Jayapal says she’s “proud of this moment” not only because she is a woman of color at the negotiating table — she emigrated from India at age 16 and became the first Indian American woman to serve in the House when she was elected in 2016 — but also because her caucus has stayed unified.

“We are fighting for something that will benefit the entire country,” she said.

But enactment of Biden’s agenda is far from certain. There are bigger obstacles in the Senate, where the support of moderate Democratic Sens. Joe Manchin of West Virginia and Kyrsten Sinema of Arizona will be needed for anything to pass. Both want the proposal scaled back.

And while the liberals are fighting for Biden’s priorities, their stance risks dividing a party that remained mostly united through Donald Trump’s presidency. With thin margins in both the House and Senate, those splits could ultimately leave the party — as Biden told the caucus last week — with nothing.

Some see an echo of the 2010 Tea Party wave. Like the progressives, the conservatives elected that year — who later formed the Freedom Caucus — often withheld their votes to shape the agenda and force concessions from their leadership.

Jayapal rejects those comparisons to the Freedom Caucus, which she says is a “caucus of no.” The Congressional Progressive Caucus, she said, “is trying to get things done.”

As chairwoman of the Progressive Caucus, Jayapal has proven to be an ambitious foil to the moderates, following the path blazed by liberal icon Bernie Sanders, the Vermont senator and former Democratic presidential candidate who is fighting for the progressive priorities in the Senate.

But Jayapal seems to have another mentor in mind. She recently compared herself to Pelosi, who is renowned for her skill at counting and winning votes. “I am a good vote counter also,” Jayapal told reporters amid the negotiations.

“I was an organizer for 20 years before I came to Congress, and I came in on a theory of change that if we really wanted to change politics so that they could work for working people, then we needed to be organizing on the inside,” Jayapal told The AP. “And so that’s what I’ve tried to do.”

She said she answers texts “at all hours of the night” and has worked to build up a progressive caucus that was “more like a social club” when she first arrived in 2016. The caucus has also worked since Democrats won the House majority in 2018 to work more closely with outside allies.

“We’re very, very strategic and coordinated,” Jayapal says. “So all of that I think has helped us to become a force, and it’s not something that happened overnight. It’s something we’ve been working towards for many years, over the last three years, and we’ve made incredible progress.”

She also credits Sanders and Massachusetts Sen. Elizabeth Warren, liberals who ran to the left of Biden, with pushing him to embrace many of the ideas now at the heart of his social spending plan.

“So when the president comes out and says this is my agenda, of course that helps us,” Jayapal says. “And we’ve elected more and more progressive members.”