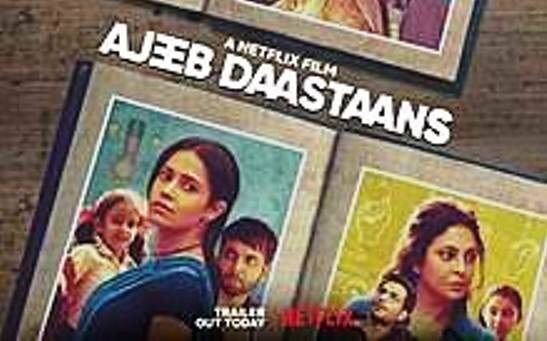 This is “mixed fare” at best, and not of any cinematic or lasting value. “Ajeeb Daastaans” does justify the title (meaning Strange Tales) but offers little to every viewer: the seeker of good fare, offbeat fare, mass entertaining fare or even pseudo-intellectual stuff. It is caught in some kind of no-man’s-land, offering precious little by any standards.

This is an anthology of four stories, and the first two—”Majnu” directed by Shashank Khaitan and “Khilauna” directed by Raj Mehta—are weird tale with a vendetta angle. Khaitan and Mehta have made good mainstream movies like “Badrinath Ki Dulhania” and “Good Newwz” respectively and these are shockers from them, especially the latter. Based on their innate talent, I expected them to steal the show here. “Khilauna,” in particular, sees a macabre angle and is generally pointlessly aggressive. Easily, it is the most disappointing tale of the lot.

“Geeli Pucchi” (which means a Wet Kiss) goes the pseudo way in full: both the heroines are lesbians, and there is an element of racial discrimination (Konkona Sen Sharma plays a Dalit who never gets her due at work and hides behind a Bengali “higher class” surname). There is friendship, advice and an element of cunning and revenge here as well. But overall, there is a likeable feel to the final outcome with a twist. Neeraj Ghaywan directs and writes this segment.

For me, the best, though quite absurd in its premise, is “Ankahi,” in which Kayoze Irani makes his debut as a director. He has sensitively handled the story of a mom (Shefali Shah) who strays for a night and has issues at home, concerning her daughter (Sara Arjun) and her husband (Tota Roy Chowdhury) who is indifferent to the fact that his daughter is going deaf. Mom has a one-night stand and a passing affair with an artiste (Manav Kaul) who is also acoustically-challenged and keeps her truth (marriage, a grown-up daughter) from him.

Ghaywan and Irani save the day somewhat, though by no means are their short films classics. However, they extract great performances from their actors—Konkona Sen Sharma and Aditi Rao Hydari, the upper-class girl and Gyan Prakash as their manipulative boss in the former’s film and all the four artistes in “Ankahi,” led by Shefali Shah and Manav Kaul, who are both superlative.

The other two films have performances to match their standards—their overall vibe is so ordinary that I did not feel anything special or standout in them.

“Ajeeb Daastaans” is a strange anthology overall that takes its title too seriously! There is no common thread between any of the tales as well.