HomeIndiaIndia and the worldBiden on Asian American Attacks: ‘It’s Un-American and Must Stop’ 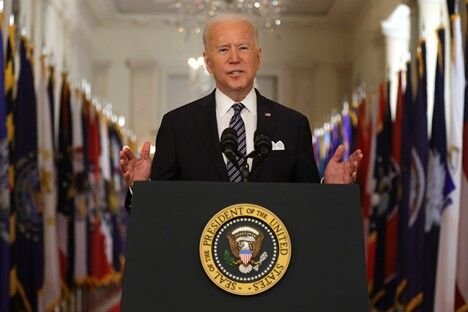 President Joe Biden, in his first prime time address as president, said that the violence toward Asian Americans that has spiked since the start of the COVID-19 pandemic is “un-American and it must stop.” The president’s reference to the hate crimes against Asian Americans was welcomed by Indian American Congressman Ro Khanna, among others. (Alex Wong/Getty Images photo)

Speaking on the anniversary of when COVID-19 was declared a global pandemic, President Joe Biden condemned the violence Asian Americans have endured since the start of the coronavirus pandemic.

The president said “it is wrong, it is un-American and it must stop,” of the attacks.

Biden’s address was his first prime-time speech as president.

Biden is lamenting an uptick of reports of “vicious” attacks and harassment against Asian Americans that’s been reported since the start of the pandemic one year ago, an Associated Press report notes.

“Too often, we’ve turned against one another. A mask, the easiest thing to do to save lives, sometimes, it divides us… vicious hate crimes against Asian-Americans, who have been attacked, harassed, blamed and scapegoated” during the pandemic, Biden said.

“At this very moment, so many of them, our fellow Americans, they’re on the frontlines of this pandemic trying to save lives, and still, they are forced to live in fear for their lives just walking down streets in America,” he said while addressing the nation.

Former President Donald Trump has repeatedly used xenophobic terms to refer to the virus that originated in China’s Wuhan province, the report said.

Some critics say the former president’s language has stoked the violence against Asian Americans, it adds.

A surge in anti-Asian attacks has been reported since the start of the pandemic. It has left Asian Americans across the country scared and concerned. The actual number of hate incidents against them could be even higher, according to a civil rights group, a Press Trust of India report noted.

Stop AAPI Hate, a coalition aimed at addressing anti-Asian discrimination during the COVID-19 pandemic, received more than 2,800 firsthand reports of anti-Asian hate, including physical and verbal assaults, between March 19 and Dec. 31, 2020, the National Public Radio reported.

IANS reports that recent research conducted by the Center for the Study of Hate and Extremism at California State University, San Bernardino, found that there was nearly a 150 percent surge in anti-Asian hate crimes across major cities in the U.S. in 2020, while overall hate crimes fell by 7 percent.

According to the research, New York City saw the highest jump, rising from 3 to 28; Boston and Los Angeles followed, with increases from 6 to 14, and 7 to 15, respectively.

The first spike occurred in March-April 2020 amid a rise in Covid-19 cases and negative stereotyping of Asians relating them to the pandemic.

The recent attacks have sparked outrage and activism in the Asian American community and spurred lawmakers and organizers to respond to the threat, the PTI report said.

“Thank you, President Biden, for speaking up clearly and forcefully against the scapegoating of Asian Americans,” Khanna said in a tweet.

“Right now, Asian Americans and Asian immigrants in our country are facing an increase in hate and violence,” the first Indian American U.S. vice president said.

Biden and Harris are committed to working with the community to ensure all Americans are protected and respected, it said.

On Jan. 26, Biden issued the Presidential Memorandum Condemning and Combating Racism, Xenophobia, and Intolerance Against Asian Americans and Pacific Islanders in the United States.

It mandates that the Attorney General shall explore opportunities to prevent discrimination, bullying, harassment, and hate crimes against Asian American and Pacific Islander individuals, and expand collection of data and public reporting regarding hate incidents against such individuals.

The reported incidents range from verbal harassments to physical altercations.

Microsoft CEO Satya Nadella also said he was appalled by the ongoing acts of hate against Asian Americans and condemned hate, racial discrimination and violence in all forms.