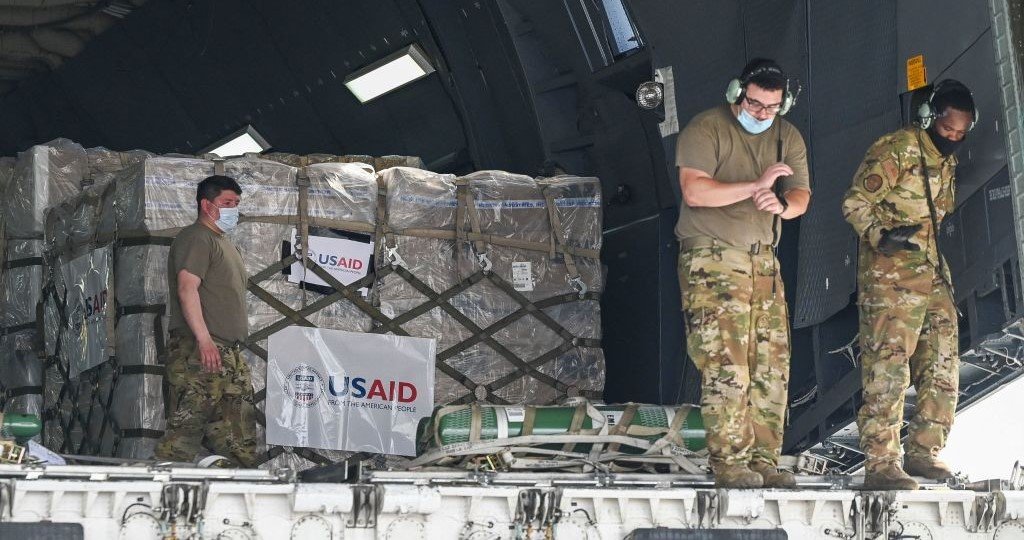 State media reported that Xi told Prime Minister Narendra Modi in a personal message of condolence April 30 that he was “very concerned about the recent situation” in India with the COVID-19 outbreak.

He said China is willing to provide additional support and assistance because “Mankind is a community of common destiny sharing weal and woe and only through unity and cooperation can the nations of the world ultimately overcome the pandemic.”

“Under the leadership of the Indian government, the people of India will certainly overcome the pandemic,” Xi added.

Wang said China would ensure that all the required materials flow to Indian entities without any delay, the statement said.

Chinese media said a first batch of 25,000 oxygen concentrators pledged to India has arrived in the country. The reports said China has already shipped 5,000 ventilators and 21,000 oxygen generators.

Earlier, Foreign Ministry spokesperson Wang Wenbin said the Chinese public, the Chinese Red Cross, local governments, NGOs and enterprises have all “taken actions and managed to raise much-needed anti-epidemic supplies for the Indian side and send them to the Indian people as soon as possible.”

Along with the ventilators and oxygen concentrators, more than 15,000 sets of monitors and nearly 3,800 tons of medical supplies and medications have been shipped to India, Wang said.

Chinese manufactures of anti-epidemic materials and medical equipment are “working at full capacity to speed up production,” Wang said.

The assistance comes despite an intense economic rivalry between the countries, Beijing’s distrust of closer India-U.S. ties, and ongoing border tensions following a bloody clash last year in the Ladakh region.

ANI adds: Several countries around the world have come forward to help India as it continues to struggle with rising coronavirus cases.

Japanese Ambassador to India Satoshi Suzuki April 30 informed that the country will provide 300 oxygen generators and as many ventilators to India.

Taking to Twitter, Suzuki said that Japan stands with India in its “greatest time of need. We have decided to proceed with the procedure to provide 300 oxygen generators and 300 ventilators.”

On April 29, Foreign Secretary Harsh Shringla said that Japan has been a “close partner” in international cooperation and has been responsive to many of India’s requirements.

The U.K. had earlier announced that it would send three oxygen generation units, each with the capacity of producing 500 liters of oxygen per minute, to India to support the country in its fight against COVID-19.

Earlier, a shipment from Ireland containing 700 units of oxygen concentrators and 365 ventilators arrived in India.

Bangladesh will be sending Remdesivir, an anti-viral medicine being used in COVID-19 treatment, along with other medical supplies to India next week, said country’s Foreign Secretary Masud Bin Momen.

“India sought Remdesivir (from us). We have taken measures to send it,” Dhaka Tribune quoted Momen as saying April 29.

As India faces a major increase in the coronavirus cases, the European Union is channeling further support via the EU Civil Protection Mechanism.

On April 27, the European Union announced initial offers of support made by Ireland, Belgium, Romania, Luxembourg, Portugal and Sweden. The commission is announcing further support packages from France, Italy, Austria and Finland, as well as additional supplies from Ireland via the mechanism:

France: 8 oxygen generators, each of which can make an Indian hospital autonomous in oxygen supply for approximately 10 years; liquid oxygen; and 28 ventilators.

Taiwan has promised to send a batch of oxygen concentrators and other medical supplies to India in the next few days.

“Our first shipment of the oxygen concentrators and other supplies will leave (on a China Airlines flight) before the end of this week,” said deputy foreign minister Miguel Tsao at a legislative session April 28, reported South China Morning Post. He further said that it would be the first of several shipments.