HomeNewsFacebook to Pay $4.79 Million Fine for Discriminating in Favor of Foreigners on H-1B Visas against U.S. Citizens

Facebook to Pay $4.79 Million Fine for Discriminating in Favor of Foreigners on H-1B Visas against U.S. Citizens 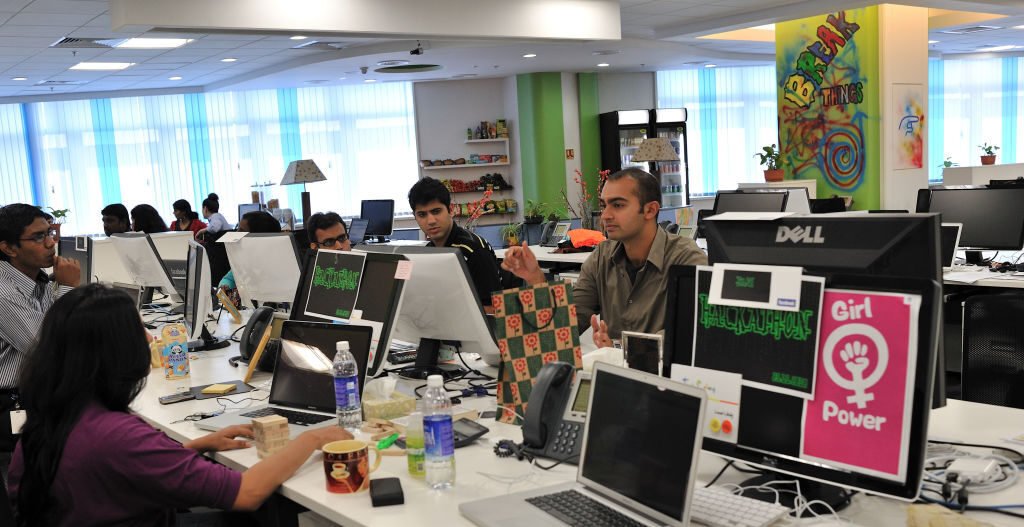 Facebook to Pay $4.79 Million Fine for Discriminating in Favor of Foreigners on H-1B Visas against U.S. Citizens

File photo of Indian and American employees working out of the Facebook offices in Hyderabad, India, Dec. 1, 2010. (Lynsey Addario/Getty Images)

NEW YORK – In a case that turns on its head the common perception of foreigners suffering employment bias in the U.S., Facebook is to pay a fine of $4.75 million for discriminating in favor of foreign workers on H-1B visas – largely used by companies employing Indian workers – and against American citizens and permanent residents, according to the Justice Department.

The department said Oct. 19 that Facebook, headquartered in Menlo Park, Calif., will also pay up to $9.75 million to the workers it had discriminated against under a settlement it made with it and the Labor Department, reported IANS.

“This settlement is an important step forward and means that U.S. workers will have a fair chance to learn about and apply for Facebook’s job opportunities,” Labor Department’s Indian American Solicitor Seema Nanda said.

The Justice Department said that the fine and the backpay were the largest “that the Division ever has recovered in the 35-year history of the INA’s (Immigration and Naturalization Act) anti-discrimination provision.”

The voluntary settlement by Facebook closes the case launched in December by the Justice Department in the final days of former President Donald Trump’s administration.

The department had charged Facebook with routinely reserving jobs for H-1B visa holders, using recruiting methods designed to deter U.S. workers from applying for certain positions, and hiring only temporary visa holders in 2018 and 2019.

The foreign workers were hired under the permanent labor certification program (PERM) that would make them eligible for permanent resident status or green cards, the Department said.

The division is under the purview of Indian American Associate Attorney General Vanita Gupta.

Facebook said that although it strongly believed that it met the federal government standards for the PERM program, “We’ve reached agreements to end the ongoing litigation and move forward with our PERM program, which is an important part of our overall immigration program.”

About 65 percent of all H-1B visa holders are from India and are a staple of Silicon Valley, widely used by software programmers and other employees of major U.S. technology companies.

The Justice Department said that Facebook had made it difficult for U.S. citizens and others with the right to work here by requiring them to apply only by mail for those positions while the foreigners were allowed to apply electronically.

Under the settlements, Facebook, whose PERM program was audited by the Labor Department this year, will also be required to advertise jobs more widely, accept electronic resumes and applications from all, and train its employees in anti-discrimination rules.

“In principle, Facebook is doing a good thing by applying for green cards for its workers, but it has also learned how to game the system to avoid hiring U.S. tech workers,” said Daniel Costa, director of immigration law and policy research at the liberal-leaning Economic Policy Institute. “Facebook started lobbying to change the system more to its liking starting back in 2013 when the comprehensive immigration bill that passed the Senate was being negotiated.”

The settlement terms announced Oct. 19 are the largest civil penalty and back-pay award ever recovered by the civil rights division in the 35-year history of enforcing anti-discrimination rules under the INA, officials said. The back pay would be awarded to people deemed to have been unfairly denied employment.

Facebook says it ended the April-June quarter this year with over 63,400 full-time employees globally and has 3,000 current job openings.

A $4.75 million fine and $9.5 million in back pay are a trifle for a company valued at $1 trillion with revenue of nearly $86 billion last year. But the announcement comes at a time of intense public discomfort and scrutiny for Facebook.