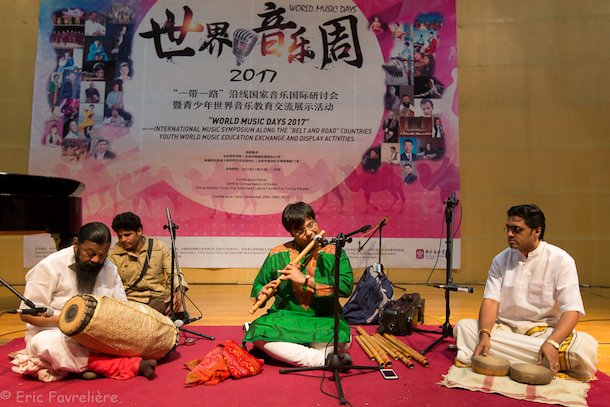 SAN DIEGO, CA – Flautist Shashank Subramanyam has been announced as a recipient of the prestigious Chevalier Award by the French government.

The Chevalier Award instituted by Napoleon Bonaparte in 1802 is the highest award given by the French government in the field of art, irrespective of nationality. This year, other than Shashank, Carnatic vocalist Vidushi Aruna Sairam has also been granted the award that has previously gone to other Indian luminaries in the music field like Manna Dey, Pandit Ravishankar, Dr M Balamuralikrishna and Lata Mangeshkar.

A child prodigy, Shashank could identify all 72 melakarta ragas when he was just three. The flute maestro T R Mahalingam was among the first to notice Shashank’s unique style and said he should be barred from any flute training lest he lost his touch. So vocal tutelage became the only permissible window for learning under vocalist Palghat K V Narayanaswamy.

By the time he was 12, Shashank was already performing and traveling extensively. He trained under Hindustani vocalist Pandit Jasraj from 2005 till his passing in 2020. The two open-minded gurus allowed him to follow his musical instincts while they taught him the nuances of vocal music. Shashank, now 44, says his flute journey was full of challenges and discoveries.