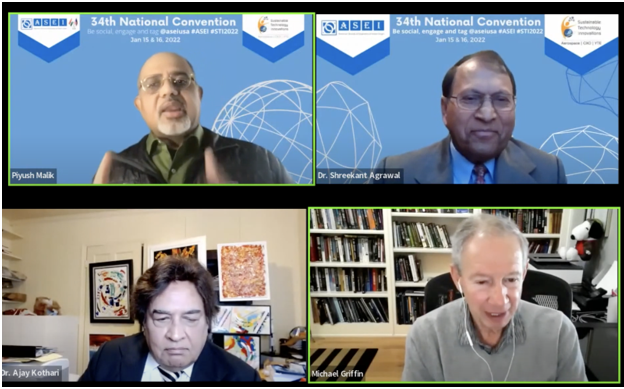 FREMONT, CA – The American Society of Engineers of Indian Origin (ASEI) held its 34th national convention focusing on Sustainable Technology Innovations on Jan.15 &16. Buoyed by the current euphoria of billionaires venturing in spacecrafts and plenty of investments pouring into the sector, the event had a “Star Trek” like feeling, exploring trends and technologies around four key areas: Space Tourism, Living on the Moon, Future of High-Speed Travel and Air Taxis.

The convention consisted of 3 mini-conferences with over 35 speakers spread across two days. The Aerospace Symposium and Youth Technology Exposition were held on the first day while the last day consisted of a power-packed CXO Summit with a number of C-Suite executives sharing their experience with over 500 participants from many countries spread across three continents, a press release said.

At the first panel focusing on High-Speed air travel moderated by Dr Bala Bharadwaj, the participants learned how as a result of six decades of research on supersonic commercial aircraft design have paved the way for a new era in high-speed travel that is not too far from becoming a reality. Dr Vik Kachoria, Dr. Kevin Bowcutt and NASA’s Mary Di Joseph each presented their point of views before engaging in a panel discussion.

The Living on the Moon panel explored getting most efficiently and cheaply to the moon not only for tourism, but to establish settlements and mining for life sustaining water-ice as well as exploring lava tubes for habitats. Moderated by Dr. David Livingston, the knowledgeable expert panelists Dr. Bhavya Lal, Prof. Haym Benoroya and Dr. Ajay Kothari shared their vision.

During the Space Access & Tourism session, panelists Dr. Kelley Weinershith, Richard French and Dr. David Livingston were engaged by Dr. Kavya Manyapu in a lively discussion. They spoke how cheaper and more frequent space access as offered by startups like Rocket Lab and Astra have shown the path.

Flying cars have been in many dreams for a long time. The business potential for air taxis is expected to grow to $1.5 trillion by 2040. All of this is possible now because of new and emerging technologies, including new batteries, autonomous operations, and advanced manufacturing.

Sidharth Jain and Aasimm Khan from Mumbai got third place for creating a haptic 4D model along with machine learning analysis by developing a non-invasive pressure mapping method to screen genital skin cancer.

The final day of the convention featured a CXO Summit where the invited speakers gave talks on latest emerging trends. City of Fremont mayor Lily Mei focused on how much infusion of advanced technology has made her city grow with safety, sustainability, and Innovation into a Smart City.

Philanthropist and venture capitalist M.R. Rangaswami captivated the audience with the story of his 40 year journey.

CXO Symposium co-chair Surbhi Kaul engaged Juniper Networks CTO Dr Raj Yavatkar in an interesting chat. They answered questions like how leadership fosters Innovation in large organizations and how one goes from being an individual contributor to a technology leader and ultimately a C-Suite executive. An innovation and sustainability panel moderated by Kunal Sood explored issues like what public and corporate leaders are doing in this realm of sustainability and innovation.