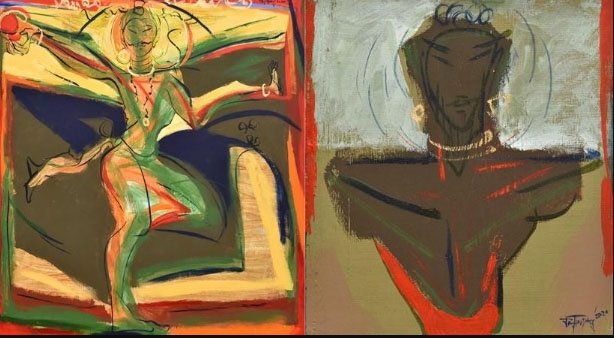 NEW DELHI (IANS) – Jatin Das is a name that needs no introduction in the world of art. A painter, poet, sculptor, muralist, printmaker, teacher and cultural expert, he has been a constant inspiration for artistic expression. With a career spanning over five decades, Das has been commemorated among the most contemporary artists of India.
The Padma Bhushan awardee has held a total of 68 one-man exhibitions over the span of his career with several of his works being displayed in public and private art collections.

Celebrating the milestone of his 80th year, Das is holding another solo exhibition at the Jehangir Art Gallery in Mumbai after five long years. Titled ‘Prakriti Purush’, the exhibition consisted of – paintings, terracotta platters, drawings and graphics based on Shiva.

The Director of Art & Soul, Dr. Tarana Khubchandani says about the exhibition, “Bringing spirit and matter onto the same canvas, Jatinda expresses his fascination with the form of Shiva and the energy of Shakti. Apart from sculpting his canvases, he produced an impressive and enchanting collection of works on terracotta. Jatin Das unveils this body of large and small works on canvas, paper & etchings, inviting one for an immersive experience in the oeuvre of his inspiration- Shiva. Personally, I find myself mesmerized once again!”

Das says, “Normally, I don’t like to talk about my work. Neither at a show nor in a brochure. In my early days, I had a little Shiva murti in the house and I used to offer it flowers. For no reason. I am not a religious person but I come from a traditional Indian family where puja, Prarthana and all the festivals are celebrated. Recently, I did a large mural at the Adani Headquarters. But before I started work on it, I did a lot of drawings, sketches, watercolor and ink drawings to free my hand, to free my thoughts. So, in the two years in Ahmedabad, along with the mural, I also painted on little canvases and boards; some etchings and on terracotta platters (tawdi), a series of works on the same theme.”

He adds, “As I drew and painted, the works took the energy of Shiva-Shakti. I began to visualise the series on Shiva as Prakruti and Purush. There cannot be any form unless there is Prakruti. It is Ardhanarishwar. I was amazed to see an Ardhanarishwar sculpture even in Egypt! And when somebody read out the various forms of Shiva, to my surprise, they befitted the postures that I had painted. I never pick a theme to draw or paint. I work and it flows and I follow that journey. I turned 80 on the 2nd of December 2021. I have seen many tough times in my life and now I am tired. Yet I continue my journey.”