HomeIndiaIndia and the worldPM Sunak’s Hindu Creds: Diwali at 11 Downing Street, Oath on the Gita, Sacred Thread on Wrist 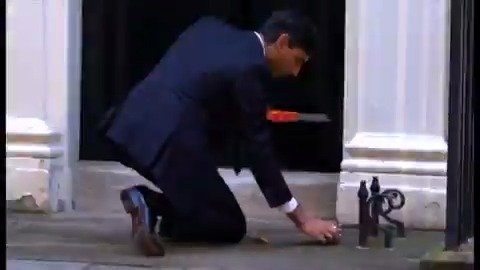 LONDO, (IANS) – Even as they wonder whether Rishi Sunak will be able to steer the Conservatives and his country out of the “fiscal black hole” they must contend with, British commentators haven’t missed the significance of his elevation to Britain’s highest political office on Diwali.

The timing is particularly significant in his case because Sunak will be the first practicing Hindu to preside over a nation whose King is the defender of the Church of England. Sunak made history when he swore his oath to Parliament after the 2017 general elections with his hand on a copy of the Bhagavad Gita, as pointed out by ‘The Guardian’.

And he was also the first occupant of No. 11, Downing Street, the official residence of the Chancellor of the Exchequer to celebrate Diwali at the doorsteps of his then home.

Despite growing up in Britain and going to Winchester, Oxford University and then Stanford, Sunak has never glossed over his cultural roots, staying away from beef, and keeping a statuette of Lord Ganesha on his worktable.

“I can proudly say that I am a Hindu and being a Hindu is my identity,” he said in a media interview, adding that his faith “gives me strength, it gives me purpose. It’s part of who I am.”

In his first speech as the Prime Minister he was seen wearing the sacred red Hindu ‘Kalawa’ thread. Mouli or Kalawa is a cotton red thread roll, considered to be sacred and used during religious ceremonies. Sunak was seen wearing “Kalawa” when he waved to the public from outside No 10 Downing Street.