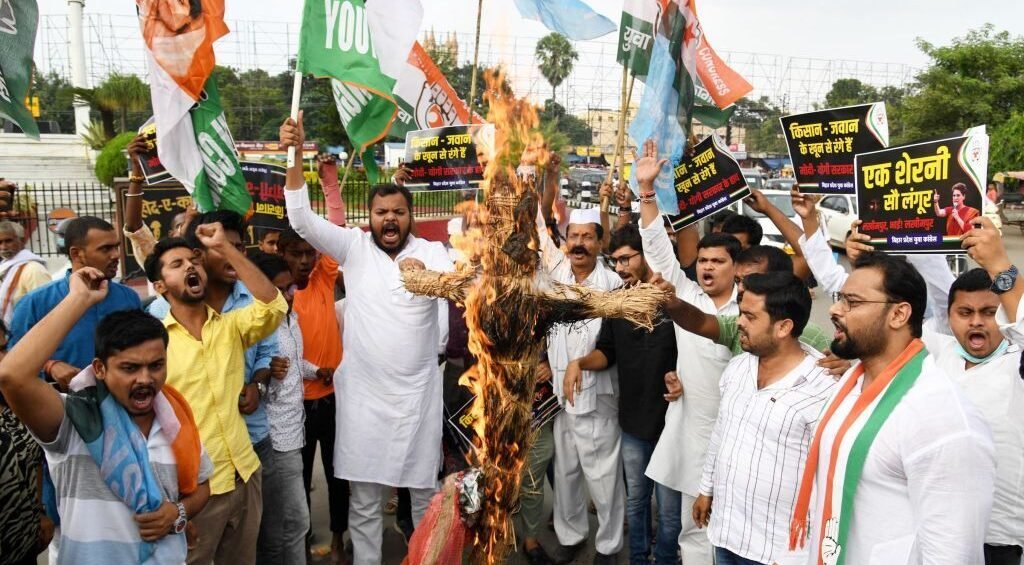 Youth Congress activists demonstrating and burning an effigy of Uttar Pradesh Yogi Adityanath during a protest against the killing of farmers in Lakhimpur Kheri, at Kargil Chowk, on Oct. 4, 2021 in Patna, India. (Photo by Santosh Kumar/Hindustan Times via Getty Images)

LAKHIMPUR KHERI, Uttar Pradesh – The FIR lodged against Ashish Mishra Monu, the son of Union Minister of State for Home Ajay Mishra ‘Teni’, in connection with the recent violent incident in Lakhimpur Kheri, in which a total of nine people were killed, accuses the minister’s son of serious charges.

As per the FIR, four of the victims were mowed down by a vehicle allegedly being driven by Ashish Mishra.

The FIR has been filed for murder, causing death due to reckless driving, criminal conspiracy, rioting, rash driving, causing grievous injuries to any person by doing any act so rashly or negligently as to endanger human life, along with other sections at the Tikunia police station.

The FIR states that the whole incident was ‘premeditated’ and that the entire ‘conspiracy was hatched by the BJP minister and his son’, who committed the act in a display of ‘hooliganism’. The FIR also mentions 15-20 unnamed persons as accused.

The FIR further read, “The incident took place at around 3 pm when Mishra, along with 15-20 others, who were armed with weapons, came to the protest site in Banbirpur in 3 speeding four-wheelers. Monu Mishra, who was sitting on the left side of his Mahindra Thar vehicle, opened gunfire, mowed down the crowd and went ahead. The firing led to the death of farmer Gurvinder Singh, son of Sukhwinder, a resident of Matronia in Nanpara.”

On Oct. 3, several farmers were holding protests against the visit of Uttar Pradesh Deputy Chief Minister Keshav Prasad Maurya to Lakhimpur Kheri, when four protesting farmers were killed after they were mowed down by an SUV.

Allegedly, the SUV was part of the convoy of Union minister Ajay Mishra Teni.

The Yogi Adityanath government in Uttar Pradesh, meanwhile, has set up a Special Investigation Team to probe the Lakhimpur-Kheri incident.

ANI adds from Lucknow: The Uttar Pradesh government on Oct. 5 denied permission to a 5-member delegation of the Congress Party led by Rahul Gandhi to visit the Lakhimpur Kheri district.

As per the official note, “Section 144 of CrPC implemented in the state capital Lucknow with immediate effect. Section 144 will remain in force in the capital till November 8 to maintain law and order and ensure adherence to COVID-19 rules in view of upcoming festivals, various entrance exams and farmers’ protests.”