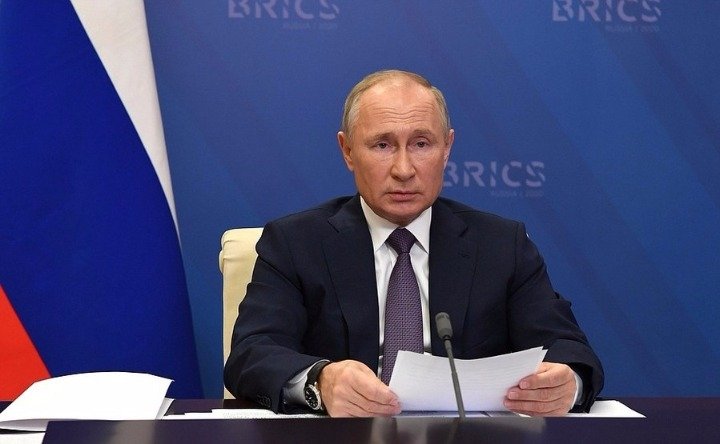 The Russian strategy in the ongoing Ukrainian crisis is aimed at not allowing NATO to accept Ukraine as its member.

The ongoing war of nerves and escalating tensions between the US and Russia over Ukraine has entered its fourth month after the Russian forces started their build-up in areas near the Ukrainian border in Nov.2021, but the genesis of the conflict goes back to 2013 or even to 2008, when Ukraine applied for NATO membership.

Historically, Ukraine was a part of the Soviet Union until 1991 and is currently a country lodged between Russia and Europe. After 1991 even its polity seemed to be under Moscow’s influence and its foreign policy over the years has wavered being either pro-Russia or pro-European Union.

But the current crisis owes its genesis to a rather vital source of energy, i.e. natural gas, which both the Russians and the Americans have not clearly mentioned in their talks or given out as a reason for the conflict.

Genesis of the crisis

If we try to decode the crisis we find that it is basically about energy and how it will shape-up the regional and global geopolitics. It is a fact that despite various global initiatives and campaigns to replace the fossil fuels, we still do not have any viable source of sustainable technology, which could provide low-cost and dependable power on a massive global scale. In this scenario, natural gas, the least polluting fossil fuel has become more and more critical as a viable energy source.

Russia, which is the world’s largest exporter of natural gas, currently supplies about 35 per cent of Europe’s demand. At the heart of the current conflict lies the Nord Stream 2 gas pipeline which will link Russian gas fields directly with Germany – the largest European economy, resulting in Western Europe becoming more dependent on Russian gas.

In 2021 Germany whose 13.3 per cent energy needs were met by nuclear energy needs Nord Stream 2 gas supply really quick, as it is committed to shut down its nuclear plants by the end of this year. Though Germany has invested massively in wind and solar power generation, yet it can’t be sure about their final gestation. One of Germany’s largest trade partners Russia hopes to meet Germany’s energy demands through Nord stream 2.

Nord Stream is a labyrinth of offshore natural gas pipelines in Europe, running under the Baltic Sea from Russia to Germany and then further on to Western Europe. The Nord Stream projects have been fiercely opposed by the United States and Ukraine, as well as by other Central and Eastern European countries, because of concerns that the pipelines would increase Russia’s influence and bargaining power in Europe.

In the past older Russian pipelines carrying gas to Europe passed through Ukraine. These gas pipelines generated revenue for Ukraine, as they passed through its land. But Russia in 2010 launched the Nord Stream 1 bypassing Ukraine through under sea pipelines in the Baltic Sea, Nord Stream 2, targeted to go on-stream by the middle of this year, follows the same route and will double the gas supply through the network to 110 billion cubic meters per year.

Further, the US advisors think that Vladimir Putin will be able to use Nord Stream 2 for strategic leverage as he’ll be controlling a vital energy source to many European countries. And this may impact the American influence in the region.

Historically, Ukraine has always acted as a natural buffer zone between Russia and Europe. It has always given enough lead-time to Russian army to prepare and strategies while the enemy forces pass through the vast steppes of Ukraine.

However, even after the break-up of the former Soviet Union in 1991, Russia has tried to control Ukraine, through installing puppet governments. But since the early 2010s, most of the regimes in power in Ukraine have shown pro-US tendencies. To warn such regimes, Putin annexed the Crimean region from Ukraine in 2014.

After losing Crimea, Ukraine applied for NATO membership with more vigor. Putin cautioned NATO that it would face consequences if Ukraine were accepted as a member.

The danger upper most in Russian generals view is that in case of Ukraine becoming a NATO member, NATO boots would be much more nearer to Russia.

In the latest episode, the American and British reactions, after Russia started to build up its military presence at the Ukrainian border in November 2021, were very hysterical and during the last two months the American leadership has predicted a Russian attack the very next week, but so far nothing has happened on that front. Biden’s first statement on the conflict avowed that the US would not allow Nord Stream 2 to go on-stream if Russia invaded Ukraine. He also warned Russia of strict international sanctions.

Meanwhile, to complicate matters further, Russian-backed rebel leaders in eastern Ukraine have announced plans for military mobilization amidst increasing tensions. Denis Pushilin, leader of the self-proclaimed Donetsk People’s Republic, said he had issued a decree for “general mobilization” on Saturday, while another separatist leader, Leonid Pasechnik, signed a similar decree for the self-proclaimed Luhansk People’s Republic.

But Putin knows quite well that a full-scale invasion of Ukraine will be enormously costly for the US and West European countries. No one could predict Putin’s next action but the real intention behind all this brinkmanship is that he is insistent on keeping Ukraine as a buffer zone and could go to any extent to thwart the US plus UK and western European countries’ effort to allow Ukraine in their and NATO’s camp and influence. So far, he has been able to achieve this through intimidating tactics and not war, as he also knows that how costly that scenario would be for Russia. And if Germany were forced to cancel its Nord Stream 2 contract than the economic cost of a war would be a financial catastrophe for Russia, which it is ready to avoid.

(Mirza is a political commentator based in New Delhi, opinions are his own)