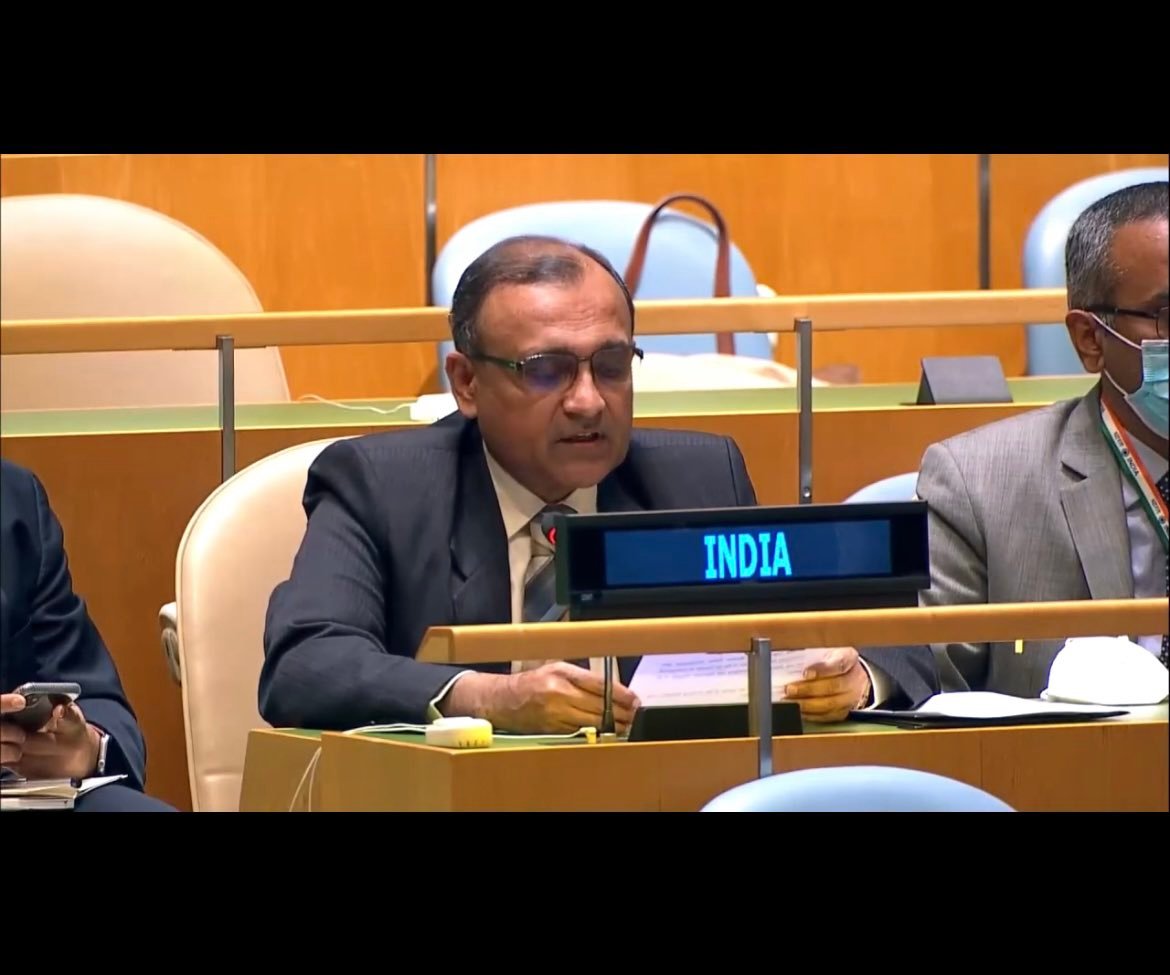 Despite lobbying from various global parties and interests, India has remained a friend of Russia in the global scene. Above, permanent representative T.S. Tirumurti at the UN. (photo Twitter)

NEW YORK, NY (IANS) – The UN General Assembly on Mar.2 voted overwhelmingly to censure Russia’s invasion of Ukraine, but India chose to abstain yet again on the vote “in view the totality of the evolving situation.”

The 141 votes that the resolution — more than two-thirds of those voting — received was a diplomatic blow to Moscow.

Only five countries voted against the resolution, while 35 abstained and 12 absented themselves.

He said: “India supports the international community’s call for an immediate ceasefire. We also support safe humanitarian access to conflict zones. We remain firm in our conviction, that differences can only be resolved through dialogue and diplomacy.”

This was the fourth abstention by India on a vote on the Ukraine issue at the UN — the other three at the Security Council where India is an elected member.

Stymied by the Russian veto at the Council on a resolution condemning Russian invasion and demanding the withdrawal of its troops, the Council had voted earlier to refer the issue to the General Assembly.

The resolution does not carry the same teeth as a Council resolution would have, but it has moral and political weight, scoring a diplomatic victory for the US and their allies — but most of all for Ukraine.

The resolution was somewhat softened by saying it “deplores” Russia rather than condemn it to get broader support.

UN Secretary-General Antonio Guterres said after the vote: “The message of the General Assembly is loud and clear: End hostilities in Ukraine — now. Silence the guns now. Open the door to dialogue and diplomacy — now.”

“The brutal effects of the conflict are plain to see. But as bad as the situation is for the people in Ukraine right now, it threatens to get much, much worse. The ticking clock is a time bomb,” he said.

Tirumurti said: “We remain firm in our conviction, that differences can only be resolved through dialogue and diplomacy. Prime Minister Modi has unequivocally conveyed this in his discussions with world leaders including of the Russian Federation and Ukraine. He underscored the urgent imperative for humanitarian access and movement of stranded civilians.”

“We therefore sincerely hope that the second round of talks between the Russian Federation and Ukraine will lead to a positive outcome,” he added.

“India urges that all member states demonstrate their commitment to the principles of the UN Charter to international law in respect of sovereignty and territorial integrity of all states. Keeping in view the totality of the evolving situation, India decided to abstain,” he said.

The UAE, which had abstained along with India and China at the Security Council, however, voted for the resolution at the General Assembly.

Pakistan, Bangladesh and Sri Lanka also abstained, while Nepal, Bhutan and the Maldives voted for the resolution.

Bhutan’s vote was a surprise as it has a special relationship with India and coordinates its foreign policy decisions with it.

Reflecting the sentiments of some of those abstaining, South Africa’s permanent representative Mathu Joyini said her country abstained because the resolution would have driven a deeper wedge between the parties while it should have welcomed the talks between Russia and Ukraine and given more prominence to the role of the UN.