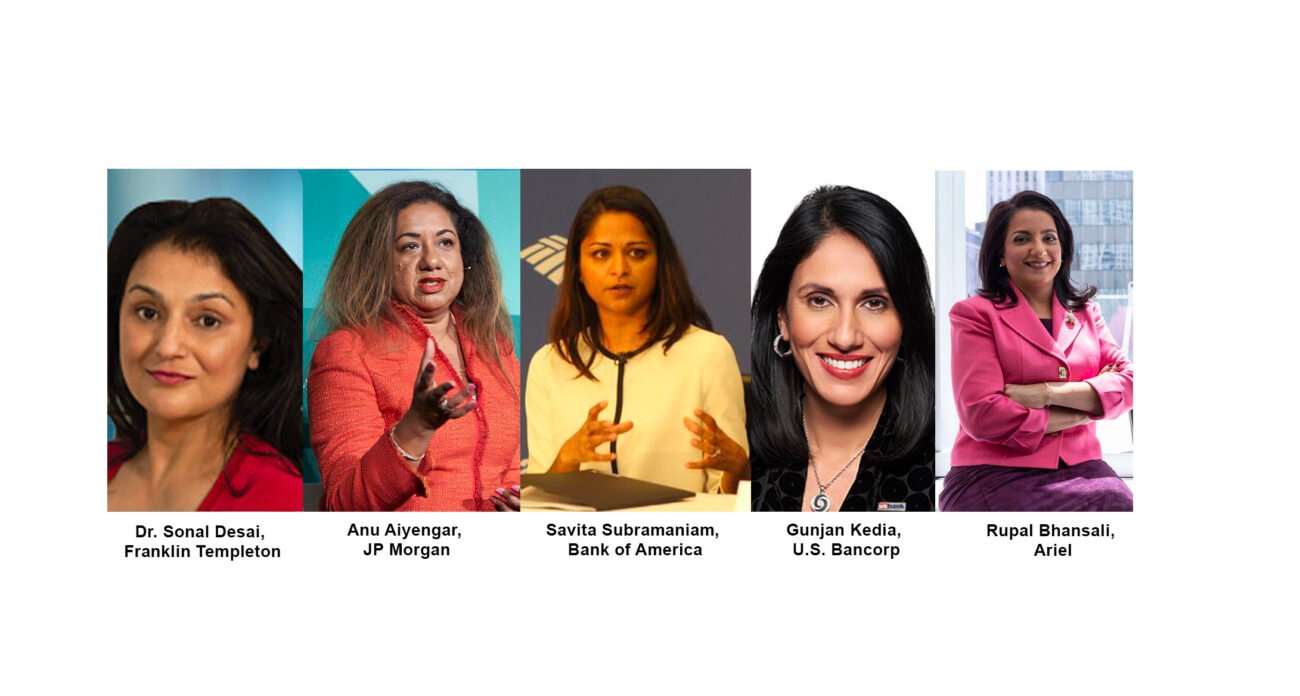 It spotlights women who have helped some of the nation’s biggest, most important companies navigate the Covid pandemic and the challenges that have arisen in its wake. The elite Barron’s list also recognizes these women as those leading it confidently to the future.

And the score card has several Indian American laureates:

Anu Aiyengar joined JP Morgan in 1999, after her graduation from Smith College and MBA from Vanderbilt University. Today she is the Global Co-Head, Mergers and Acquisitions and a deal-making power force at multinational banking and financial services. Aiyengar has been a champion for women in business. She co-chairs the Investment Bank’s women network and is involved with initiatives within J.P. Morgan and on Wall Street to recruit, mentor and develop women. She is also a guest lecturer at Harvard Business School, and Chicago’s Booth school, as well as a speaker at several women’s business conferences across financial organizations, law firms, and business schools. She is also involved in Asia Society, the World Music Institute and Pratham.

Rupal Bhansali joined Ariel in 2011 and is currently the chief investment officer and portfolio manager of Ariel’s global equity strategies, where she oversees their global research effort and manages multi-billion-dollar portfolios. A graduate of the University of Mumbai, and the University of Rochester, she started her career in 1989 and held various portfolios in financial service firms. Bhansali owes her investment approach to her upbringing growing up on stories of Dalal Street. Forbes named her a ‘Global Guru,’ in 2015. She is a frequent guest on Bloomberg, CNBC and Fox Business News. Rupal serves on the Advisory Board of Directors of the Ira M. Millstein Center for Global Markets and Corporate Ownership at Columbia Law School. She is the author of, ‘Non-Consensus Investing: Being Right When Everyone Else Is Wrong.’

Dr. Sonal Desai is executive vice president and chief investment officer of the Franklin Templeton Fixed Income Group in San Mateo, CA. She is a member of Franklin Resources’ Executive Committee, a small group of the company’s top leaders responsible for shaping the firm’s overall strategy. She is also a portfolio manager for several strategies, including Core Plus, Strategic Income, Low Duration, Global Absolute Return, and Global Fixed Income. Desai earned her bachelor’s degree from Delhi University and holds a Ph.D. in economics from Northwestern University. She has worked with the International Monetary Fund in Washington DC. She was part of Morningstar’s Fixed Income Manager of the Year in Canada in 2013.

Gunjan Kedia is vice chair, Wealth Management and Investment Services of U.S. Bancorp, Minneapolis, MN, since 2016. She has served as executive vice president at State Street Corporation and Bank of New York Mellon. She received her bachelor’s degree from Delhi College of Engineering and her Master’s degree from Carnegie Mellon University. One of Kedia’s key accomplishments over the past year was leading the wealth management unit’s expansion in Europe and extending awareness to women on how to manage their money power.

Savita Subramaniam is head of U.S. Equity & Quantitative Strategy,
Bank of America. She oversees the sell-side firm’s U.S. stock market research and sector-strategy recommendation as well as venturing to assign a target price to the S&P 500 and other equity indexes. Subramanian also serves as BofA’s first head of environmental, social, and governance research. Born and raised in the San Francisco Bay Area, Subramanian studied mathematics, philosophy, and art at the University of California Berkeley. While earning an M.B.A. at Columbia, Subramanian interned on the same team that she now leads; she joined the firm full time in 2001.