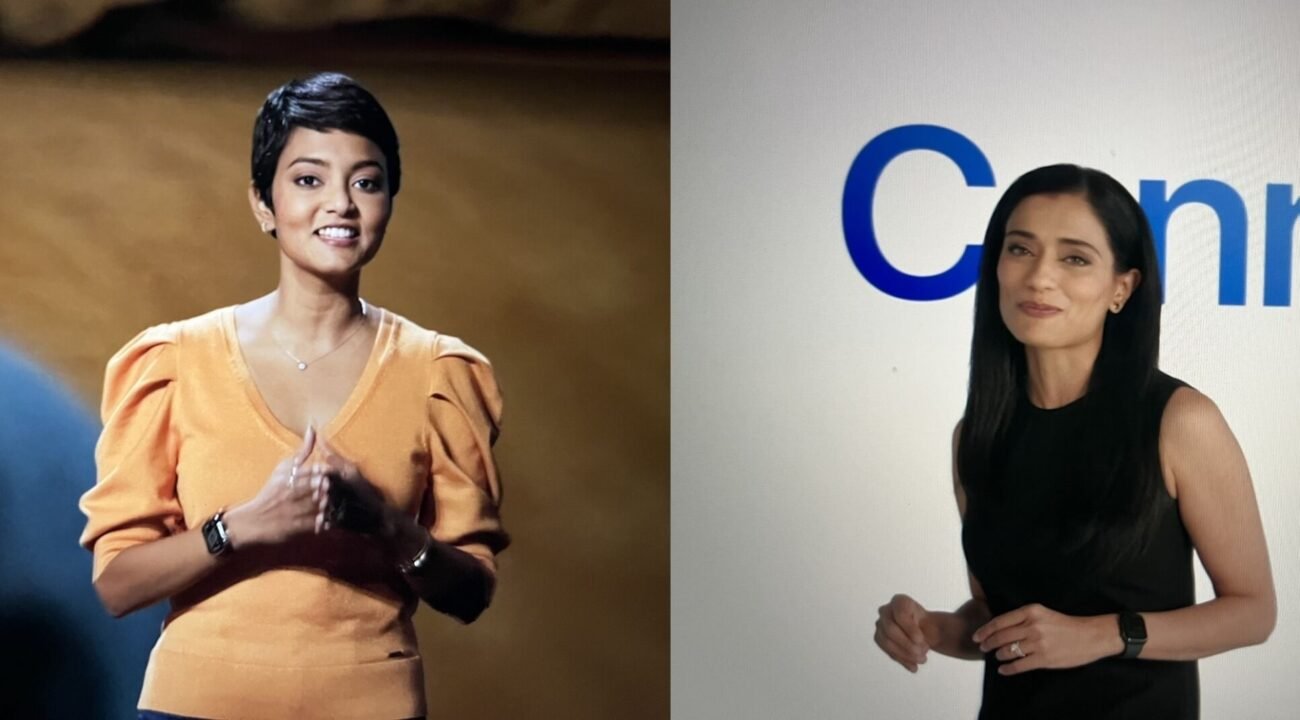 Susmita Dutta and Shruti Haldea present the next line-up of Apple products at the company’s “Unleashed” event Oct. 18. (photos via IANS)

It was the turn of Indian American women techies to take center-stage as Apple unveiled its next line-up of products, including an all-powerful MacBook Pro with new M1 chips, next-generation AirPods and other products and services.

According to her LinkedIn profile, Dutta joined Apple nearly four years ago as system test design lead, before being elevated as audio engineering program manager.

She earlier worked at GE Healthcare for more than seven years as lead system designer (ABUS Ultrasound) in California.

A Madras University graduate in engineering, Dutta now has more than 16 years of system and hardware engineering experience, specifically in systems engineering methodology, test design and mass production of low and high-volume products.

After showcasing next-gen AirPods, it was the turn of the new and all-powerful MacBook Pro with next-gen M1 chips, and Shruti Haldea from the Mac team joined the stage with top company executives, taking the audience through the machine meant for developers, filmmakers, creators and innovators.

Working at Apple for more than 12 years, Haldea joined the tech giant as global supply manager and became product line manager for Pro Mac in 2019.

Armed with an MBA from Harvard Business School, she introduced the world to the game-changing MacBook Pro with M1 Pro and M1 Max that deliver extraordinary performance and battery life, and features the world’s best notebook display.

The new MacBook Pro features a stunning Liquid Retina XDR display, a wide range of ports for advanced connectivity, a 1080p FaceTime HD camera and the best audio system in a notebook.

Combined with macOS Monterey, which is engineered down to its core to take full advantage of M1 Pro and M1 Max, the user experience is simply unrivaled for developers, photographers, filmmakers, 3D artists, scientists and music producers.

With a bachelor’s degree in applied science in mechanical engineering from the University of Waterloo in Canada, Kaloty looks after Mac architecture as an engineering program manager at Apple’s Cupertino headquarters.

He interned for some time with the product management team for operational excellence at electric car maker Tesla.