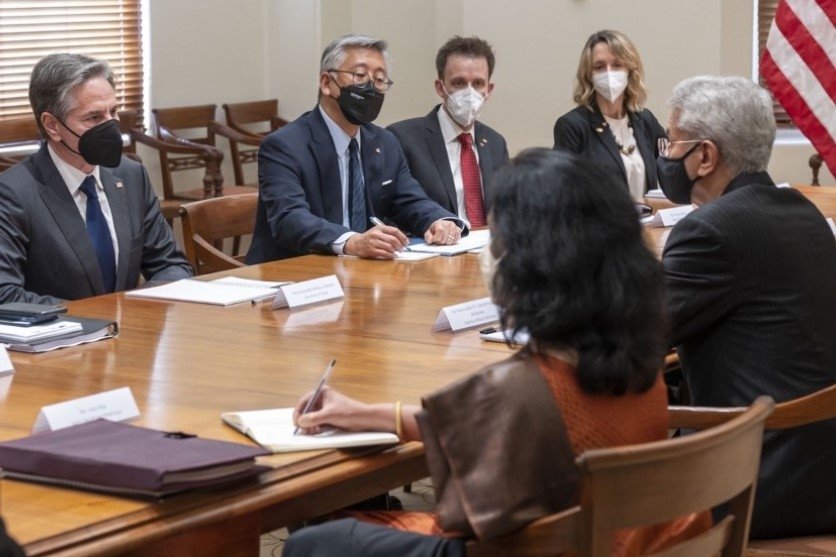 While India is drawing closer strategically to the US, it is also still dependent on Russia for a sizeable portion of its hardware. Seen above: S. Jaishankar with Antony Blinken in Melbourne on Feb.11. (State Department photo)

At their meeting on Feb.12 in Melbourne, they reviewed the progress “in broadening and deepening the US-India Strategic Partnership, which is critical to promoting peace, security, and prosperity in the Indo-Pacific region and beyond”, Price said in a statement.

The mention of Russian “aggression” in Price’s statement assumes an ominous tone because Blinken said the same day that a Russian invasion “could begin at any time”, even during the Beijing Winter Olympics now underway brushing aside speculation that Moscow would not launch an attack during the games.

The Jaishankar-Blinken meeting took place as the White House unveiled its Indo-Pacific strategy that laid down “support India’s continued rise and regional leadership” as one of its objectives.

“We recognise that India is a like-minded partner and leader in South Asia and the Indian Ocean,” the strategy crafted by the National Security Council said.

Jaishankar tweeted after his meeting with Blinken: “Our strategic partnership has deepened so visibly.”

But he was silent on Russia.

India has officially called for a peaceful resolution of the situation.

New Delhi has put on a delicate balancing act on tensions in Europe where Russia has deployed troops near the borders with Ukraine and the US and Britain warn of an imminent invasion.

When the US brought up Ukraine at the UN Security Council last week, India abstained from voting on a procedural issue in a seeming throwback to its non-alignment.

While India is drawing closer strategically to the US, it is also still dependent on Russia for a sizeable portion of its hardware.

This was the first in-person meeting between Jaishankar and Blinken since they met in Oct. in Rome on the sidelines of the G20 meeting.

Price said that Blinken and Jaishankar “discussed efforts to strengthen Indo-Pacific cooperation through the Quad and expand cooperation on common priorities, including reinforcing the rules-based international order”.

Jaishankar and Blinken were in Melbourne for a meeting of the Quad foreign ministers in which Marise Payne of Australia and Hayashi Yoshimasa of Japan participated.

A joint statement by the four top diplomats called for the elimination of terrorist safe havens and for bringing to justice the perpetrators of cross-border terrorism.

“We call on all countries to ensure that territory under their control is not used to launch terror attacks and to expeditiously bring to justice the perpetrators of such attacks,” they said.

Reiterating the condemnation of the 26/11 Mumbai and Pathankot terrorist attacks, the statement said: “We denounce the use of terrorist proxies for cross-border terrorism and urge countries to work together to eliminate terrorist safe havens; disrupt terrorist networks and the infrastructure and financial channels which sustain them, and halt cross-border movement of terrorists.”

Without naming China which poses a common threat to the four countries, the Ministers said: “Quad partners champion the free, open, and inclusive rules-based order, rooted in international law, that protects the sovereignty and territorial integrity of regional countries.”

The ministers spoke of India’s role in their ambitious initiative to give 1 billion Covid vaccine doses to countries in the region.

“We are pleased with the Quad Vaccine Partnership’s rapid progress in expanding vaccine production at the Biological E Ltd facility in India, which aims to deliver at least 1 billion vaccines by the end of 2022,” their statement said.

Price said that Jaishanker and Blinken discussed cooperation on fighting the Covid-19 pandemic.