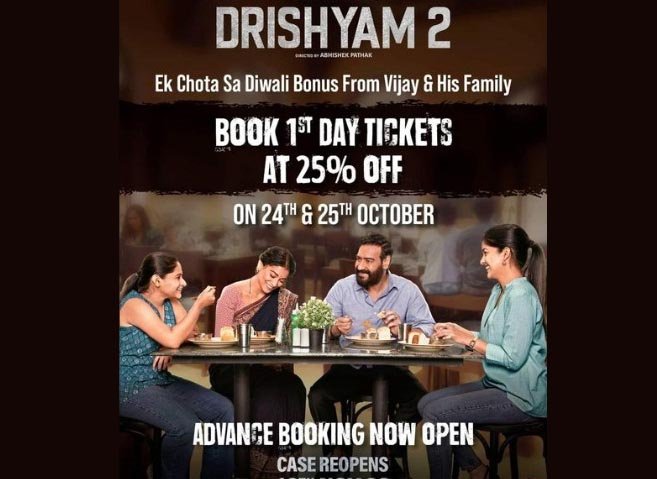 A yet-to-be-released film comes up with a display ad offering a 25 percent discount on admission rates. Has that ever happened before? Now, in the multiplex era, or in the single screen era? It has not. Ajay Devgn’s ‘Drishyam 2’ opens on November 18, but the advance booking has already commenced and for those who booked opening-day tickets on October 24 and 25 were offered a discount of 25 percent!

Does it make business sense to lure viewers to book tickets for a film due three weeks later the day when they have two new releases in the cinemas – ‘Ram Setu’ and ‘Thank God’, both fresh Diwali offerings. If cinemas are not drawing footfalls for new films, can one expect viewers for a forthcoming film?

What is strange is that no such offer was made for another Ajay Devgn film, ‘Thank God’, released on October 25. It is all happening now. Cinema viewing is being marketed like most consumer products. Buy one, get one free. Weekly discounted ticket days, flat Rs 400 weekdays, and so on.

It seems the multiplexes were under the wrong impression that films pulled crowds and succeeded because of the attraction of their property and not the film they screened. These cinemas may be run by some marketing genius, but they could have done well to study and research the exhibition trade as it was practiced in India. The cinemas sustained because of films and once the multiplexes came, they were starved of films and started perishing.

There were cinemas in Mumbai such as Roxy, Opera House, Swastik and Imperial that offered no luxury and no food courts. But these cinemas had a reputation of sustaining a film for silver and golden jubilees. One needs to visit the Imperial cinema in Mumbai. It is in the same condition now as it was when Amitabh Bachchan’s first blockbuster, ‘Zanjeer’, released here. The film ran for 50 weeks at this cinema. A good film had that power.

There were times when filmmakers such as Manoj Kumar and Shakti Samanta and distributors like Shankar BC waited for weeks to release their film at one of these cinemas while the film running there completed its run. A film and the cinema house complemented each other’s reputation. Is there any cinema anywhere, especially of the multiplex kind, which can claim to draw an audience unless the film or the star had that drawing power?

These multiplexes were compelled to screen films such as ‘Suraj Pe Mangal Bhari’ on the maker’s terms to get footfalls. Now that these cinemas are facing tough times, various schemes are being introduced to lure viewers. They screened huge Hollywood classic hits such as ‘Star Wars’, ‘ET: The Extra-terrestrial’, and so on. Then there was an Amitabh Bachchan retrospective, to coincide with his 80th birthday, which was a huge success. And finally came the Indian Cinema Day when tickets were sold at the flat rate of Rs 75. That was also a success.

Through their own experiments, the cinemas have proved that if the admission rates are affordable, viewers will come to watch even a 40-year-old ‘ET’ and 47-year-old Bachchan film, ‘Deewaar’. At the prevailing rates, they don’t even venture out to see a new film.

It made sense that all the single-screen cinemas in India accommodated almost 70 per cent of its viewers in the stalls, which had varied rate slabs, and the few who came with families and could afford it in the balcony class. That was a fair division considering the buying power of film lovers. A cinema had a seat for all.

At these single-screen cinemas, one had the option of buying a pack of wafers or samosa and wash it down with a glass of water. None of that was costlier than the rates charged outside the theatre. One also had the option to walk out and buy vada pav.

I often watch a film at the mass-generating G7 Complex in Bandra, Mumbai, and can enjoy the same facilities. But you can’t leave a multiplex in the interval and come back to continue watching the film!

Exhibitors lost the plot somewhere along the line. More so after the Covid-19 lockdown. OTT platforms replaced cinema entertainment. At the same time, the actors were gradually losing their following by indulging in things they should not. Social media has also been spelling doom for a lot many stars.

Otherwise, what explains that despite Diwali holidays and the popular interest in Lord Ram and Ayodhya for both reasons of faith and the debates surrounding the two topics, ‘Ram Setu’ could not bring in the audience and still needs to give out inflated figures? After all, Akshay Kumar is known to further the issues of national and social interest! The other release, ‘Thank God’, has also not made much of the Diwali festival.

I think between cinema management and filmmakers, they would do well to introduce more schemes to bring the audience back to the cinemas. In the past, films brought in the crowds. Now that they don’t, so let us see if your cola and popcorn help if made affordable.