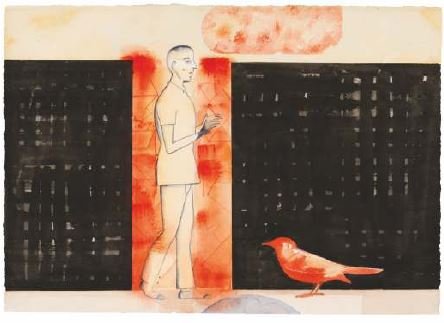 KOCHI, (IANS) – Vasudevan Akkitham had no choice left but to restrict his artistic thoughts to the four walls of his house when everything was forced to shut down to curtail the fast-spreading Covid-19.

He sat down at his dining table with limited resources and painted a journal of 365 days. And now ‘An Almanac of a Lost Year’ has become a hit in artistic circles.

“During the lockdown, I decided to explore domestic space and work with a medium that is easy to deal with and has a certain degree of fluidity. As I began to work on it with small papers and watercolors, a disconnect with the world outside happened inside me. So, I created a new world which was sometimes sad, bizarre, and at times optimistic,” said Akkitham, who is also a teacher.

The 64-year-old artist from Palakkad, who resides in Baroda, reflects upon different nuances of life in the 365-small format work.

It is a world where there are fantasies, thoughts, and imagination and deals with many political issues.

“My father passed away around the same time and it was difficult for me to reach Kerala but somehow I managed. On that day, I did a little drawing at my father’s funeral. I don’t really want to point them out to any incident. There are many connections with the things which happened in the world around me,” said the artist. (IANS)