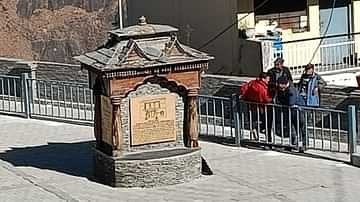 DEHRADUN, (IANS) – Stressing that every minute is important, Uttarakhand on January 9 directed immediate evacuation of people from Joshimath, where land is sinking rapidly.

Cracks have appeared in 678 houses so far while 82 families have been shifted to safe locations in the town.

The latest casualty in Uttarakhand’s Joshimath town, which is witnessing extreme land subsidence, is a temple in the prestigious Shankaracharya Math, established by Adi Jagatguru Shankaracharya, which has developed cracks and has sunk down about six inches. The Shivling inside the temple has also developed cracks.

Devotees believe Shankaracharya attained Vedic knowledge by meditating inside the cave, under the Kalpa tree, 2500 years ago. The same tree is on the verge of extinction today.

Cracks have appeared in the entrance of the math, Lakshmi Narayan temple and auditorium, where the Totkacharya cave, and Tripur Sundari Rajarajeshwari temple are situated. Efforts had been made to rectify the cracks earlier by applying cement, but the situation had worsened in the last 7-8 days. At the same time, the floor of the Narasimha temple complex has started sinking.

Residents of Joshimath town in Uttarakhand state say they started noticing cracks in houses, especially after 2021 floods in the region. No injury was reported in the temple collapse y and those living nearby had vacated the area a day earlier.

Tens of thousands of devotees heading for Badrinath and Him Kund Sahib, key Hindu and Sikh pilgrimage sites, pass through Joshimath, 305 miles northeast of New Delhi. The huge flow of pilgrims and tourists saw the town expanding exponentially over the years with the massive construction of buildings and roadways, which some experts have linked to land collapse.

The construction activities that were temporarily halted include the Chardham all-weather road — a flagship federal government enterprise to connect various Hindu pilgrimage sites, a project to set up trolleys pulled by ropes to carry pilgrims and tourists in nearby Auli, and hydropower stations.

The region witnessed a devastating cloudburst — an extreme rainfall in a short time — that resulted in the death of hundreds in 2013 as well as severe flooding in 2021. Experts say fast shrinking glaciers, in part due to climate change, is also another reason the region is hit by repeated disasters.

“Between 2015 and mid-2021, at least 7,750 extreme rainfall and cloudburst instances have been noted in Uttarakhand. Such instances are detrimental to Joshimath as they may increase the number of impacted buildings, eventually exacerbating the vulnerability of the locals,” said Kavita Upadhyay, a water-policy expert who is currently a research associate in the Oslo Metropolitan University’s Riverine Rights project.

“The slopes of Joshimath are formed from landslide debris. This means that there’s a limit to which the town can be burdened by buildings or disturbed by activities such as the construction of big infrastructure projects like dams and roads.”