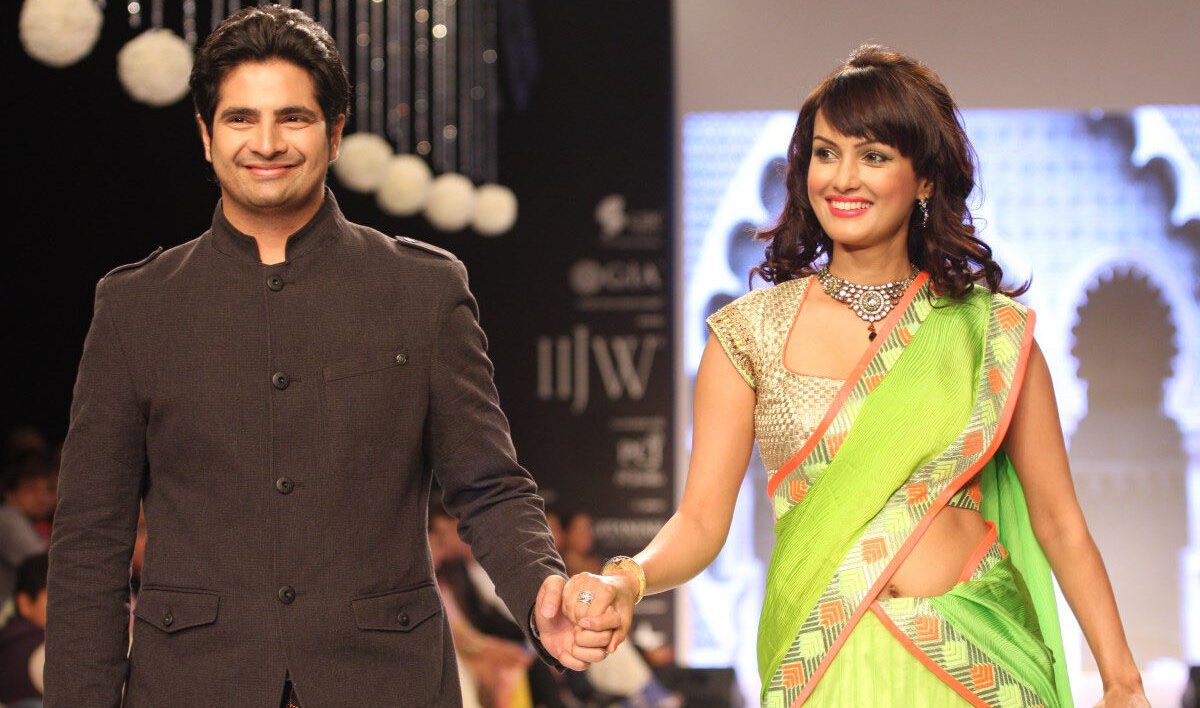 File photo of television actor Karan Mehra and his wife Nisha Rawal walking the ramp during the India International Jewelry Week in Mumbai in 2013. (photo via IANS)

MUMBAI — TV couple Nisha Rawal and husband Karan Mehra made news recently when reports of their marriage being on the rocks after domestic abuse and violence, allegedly on Mehra’s part, made news, disturbing their wide circle of friends and associates who thought them to be a picture-perfect couple.

Rawal not only alleged that there was someone in her husband’s life but also that he abused and beat her frequently, while Mehra denied all allegations. The “Shaadi Mubarak” (!!) actress stated that she put up with his domestic violence for so long because “I love him. I still do.” Earlier, Rawal had denied any trouble in their marriage.

On May 31, this complaint was filed by her because he had allegedly banged her head into the wall. She finally filed an FIR with the Goregaon police station and Mehra was arrested. He got bail the next day. Denying even that, Mehra stated that she had said, “See what I do now!” and smashed her head into the wall. She told everyone that Mehra had done it, and her brother, who was there, allegedly also slapped and punched Mehra.

The brother, reportedly, had come to discuss their possible divorce but had asked for very high alimony that Mehra could not afford, and which he told them. After this, Mehra was talking to his mother on phone when Rawal entered and started hurling abuses at him and his family. She allegedly spat on him and when he asked her to go out, she threatened him and banged her own head against the wall. He added that the CC cameras installed in his home had been deliberately switched off.

In a sensational new development, Nisha has accepted that she has bipolar disorder. In multiple reports, Mehra had claimed that his wife was diagnosed with bipolar disorder. To which Rawal has responded by stating that she indeed has been diagnosed, but that was in 2014 when she had suffered a miscarriage.

“Bipolar is a mood disorder, which happens due to extreme trauma and it’s genetic sometimes. I was diagnosed with bipolarity and I am not going to lie about it as I am not ashamed about it. But I am not a psycho, it is a mood disorder. And you all know how balanced I am. I create content for the web, I make videos and write about things. I don’t have to prove anything,” she said at a press conference June 1.

She went on, “In September 2014, I was five months pregnant when I lost my child. Recently, I made a mothers’ group where women who lost a child can speak up about it, as when I lost my child, I did not have anyone to talk to about the loss. I wanted to go to my parents and talk to them because it was a very big trauma for me. In the middle of it, my husband was beating me up, abusing me, he was unavailable, totally detached and that’s when I went to a therapist. In fact, Karan had stopped me from going to a therapist, he didn’t let me go to a gym, he was very controlling in everything,” she alleged.

Talking about the night of May 31, when she filed a complaint, Rawal said, “I lashed out on him about all the feelings that I had bottled up. When I got up to leave the room, he held my hair and pushed me against the wall. He also held my neck while pinning me against the wall.”

She also stated that Mehra has been having an affair with another woman and he had admitted to it. He also said that it is serious and that he loves someone else and that their relationship was also physical. The woman was from Delhi, and whenever he has been to Chandigarh for the shoot of his new show they would meet.

She also told the media that she does not want a father like Mehra for their child, Kavish, and added that she feels it is her responsibility to raise her voice against domestic violence. In turn, Mehra has said that he is worried for his son and he would not be safe with Rawal. “I don’t want my child to get affected,” he said.