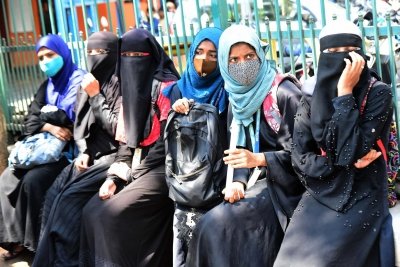 The Pew Research Center found differences in North and South India to be driven by Hindu women as head coverings are worn by most almost six-in-ten Hindus while Muslim women cover their heads irrespective of the region, they live in. (IANS photo)

WASHINGTON, DC – The Pew Research Center released a report on a recent study with demographic details on the prevalent practice of covering the head by women in various parts of India.

The study comes in the background of, “protests in recent weeks in India over the Muslim headscarves in schools,” which have gained “international attention.”

The Pew research focused on which women prefer to wear the head coverings, region wise and religion wise.

It reported that head coverings are relatively common among Indian women. About six-in-ten women in India (61%) say they keep the practice of covering their heads outside of their homes, according to the survey conducted in 2019-2020. That includes a majority of Hindu women (59%), and roughly equal shares of Muslim (89%) and Sikh women (86%) – although the exact type of head covering can vary significantly among and within religious groups.

There are regional differences among India women when it comes to head coverings. The practice is especially common in the largely Hindi speaking regions in the Northern, Central and Eastern parts of the country. In the states of Bihar, Madhya Pradesh and Rajasthan, roughly nine-in-ten women say they wear head coverings in public. In stark contrast, fewer women in the South say they cover their heads in public, including just 16% in the state of Tamil Nadu.

Within the South, the state of Karnataka stands out for its relatively high share of women who wear head coverings. More than four-in-ten women in Karnataka (44%) say they wear one, compared with 26% in neighboring Andhra Pradesh, 29% in Telangana and even fewer in the states of Kerala (17%) and Tamil Nadu (16%). A majority of Muslim women in Karnataka say they cover their heads (71%), compared with 42% of Hindu women who say this.

Nationally, head coverings tend to be more common among women who are older, married, more religious and who have less formal educational attainment and those living in rural areas.

The PEW study also states that headscarf wearing also varies by political affiliation and adds that among Indians overall, 66% of women who have a positive view of the ruling BJP party say they cover their heads outside their home, compared with 53% among those who view the party unfavorably. The Center’s survey only included adults ages 18 and older and does not show what share of school-aged girls wear head coverings.