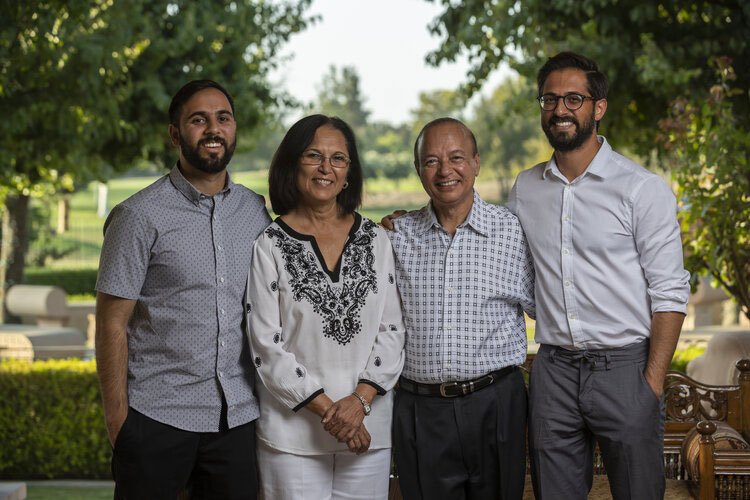 FRESNO, CA – In 1959, as Dr. Martin Luther King Jr. gave a farewell address to the people of India, he reflected on the parallels between the assassination of Abraham Lincoln and Mahatma Gandhi in their quest to heal a divided nation. King challenged current and future generations.

“If this age is to survive, it must follow the way of love and nonviolence that [Gandhi] so nobly illustrated in his life.”

In that spirit, California State University, Fresno received a $1.5 million pledge from the Ravi and Naina Patel Foundation to establish an endowed fund to create and support the “M.K. Gandhi Center: Inner Peace and Sarvodaya” in the College of Arts and Humanities. The Gandhi Center will promote the development of intellectual understanding and experiential learning of Gandhi’s philosophy of inner peace and sarvodaya. The idea of sarvodaya focuses on the development of the entire person and the construction of a nonviolent, peaceful and equitable society.

“The Ravi and Naina Patel Foundation members appreciate one of Gandhi’s most beloved principles, ‘vasudhaiva kutumbakam’ (the whole world is my family). In the spirit of this principle, although based in Bakersfield, we had no problem reaching outside our home city to create learning opportunities at Fresno State. In a time of increasing unrest and polarization, we are excited by this one of its kind collaboration with the incredible leadership team at Fresno State to create a learning center emphasizing the two central pillars of Mahatma Gandhi’s philosophy — inner peace and sarvodaya,” Drs. Ravi and Naina Patel said in a statement.

A virtual gift announcement will be held on Feb. 18. The Gandhi Center Fund will support a director, student scholarly research, curriculum development, and activities like conferences, essay and art competitions, and public lectures to bring campus and community together, a press release from the university said.

The Gandhi Center will be located in the campus library. Reflected in the library’s windows, the Fresno State Peace Garden occupies a central place on the campus. Spearheaded by Dr. Sudarshan Kapoor, professor emeritus and a supporter of the initiative, the Peace Garden holds the bust of Gandhi which looks east towards the monuments of leaders Jane Addams, Martin Luther King Jr. and Cesar Chavez. These leaders were influenced by Gandhi’s philosophy of nonviolence, soul-force and the upliftment of all. As the Peace Garden is reflected in the glass, so is Gandhi’s philosophy reflected in Fresno State’s values of discovery, diversity and distinction.

“Mahatma Gandhi’s philosophy of nonviolence changed the course of human history by illuminating a path for the individual to make lasting change through peaceful and creative action. His ideals of peace, equity and sarvodaya are intertwined in the mission, vision and values at Fresno State. Thanks to Drs. Ravi and Naina Patel’s generosity, the M.K. Gandhi Center: Inner Peace and Sarvodaya will enable an immersive experience for students who will become better equipped to make our community and the world a better place,” University President Saúl Jiménez-Sandoval said.

Dr. Honora Chapman, dean of the College of Arts and Humanities at Fresno State, is enthusiastic about the impact of this initiative. “We are very grateful to the Patels for forging this unique partnership that underscores the University’s commitment to educate current and future generations about the principles and practices of inner peace and sarvodaya through courses, service-learning projects, public events and research.”