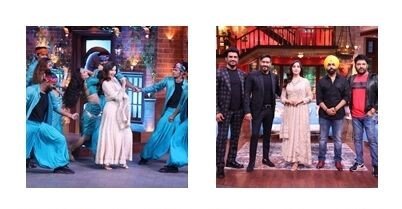 Scenes from the new season of “The Kapil Sharma Show.” (photo compilation via IANS)

MUMBAI — ‘The Kapil Sharma Show’ is all set to return with two star-studded specials with the casts of ‘Bhuj’ and ‘Bell Bottom’ on Aug. 21 and 22, respectively.

The special guests on the revived show will be the ‘Bell Bottom’ actors Akshay Kumar, Vaani Kapoor, Huma Qureshi and producer Jackky Bhagnani. ‘Bhuj: The Pride of India’ will be represented by Ajay Devgn, Nora Fatehi, Punjabi singer and actor Ammy Virk, and Sharad Kelkar. They will all be seen with their celebrity host, engaging in banter and also getting their leg pulled.