HomeOpinionWhy Ukraine is a Testbed for a Big Power Contest

Why Ukraine is a Testbed for a Big Power Contest 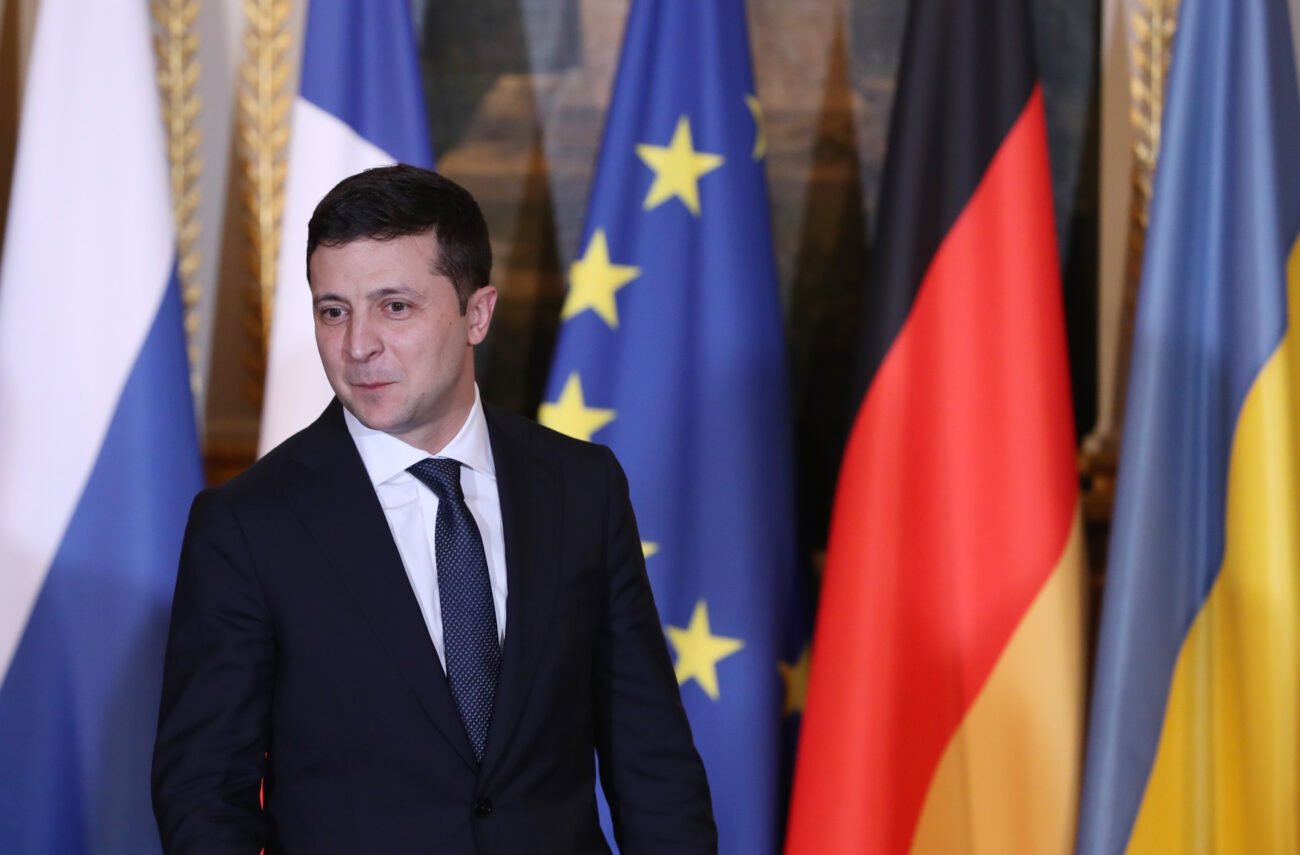 Why Ukraine is a Testbed for a Big Power Contest

Ukrainian President Volodymyr Zelensky declares Feb. 16, 2022 as ‘Day of Unity’ apprehending Russian invasion based on US assessment, after speaking to his American counterpart Joe Biden about Russia’s military buildup along Ukraine’s borders, with both committing to pursue “diplomacy and deterrence”. It comes after inconclusive talks between Russian President Vladimir Putin and Biden suggesting ‘swift and severe costs in case of invasion, as well as Normandy format between Russia, Ukraine, France and Germany. USA continues to hype the threat, following it with evacuation of troops and citizens, whereas Russia maintains that it has no intention to invade Ukraine, but draws a red-line for Ukraine not to join NATO.

Ukraine stands encircled from three directions by Russian troops with largest military posturing since World War II. Mass concentration of troops in Eastern borders, posturing and joint exercises with Belarus and Russian Black Sea Fleet combat ready with bases at Crimea. Ukraine too, fully aware of its military capacity limitations, is getting combat ready to protect its sovereignty. While the flashpoint may be Ukraine, but contestation is of big powers involved directly or indirectly. The outcome of this face-off has global implications not only in Europe, but globally including countries who are outside the region. Diplomacy is trying its best but failing so far. The geo-strategic location of Ukraine is such that, in the midst of continuing geopolitical maneuverings, it can’t help but be the test bed for this Russia-NATO competition.

Main Stake Holders and their Stance

Russia: In his meeting with former Soviet leader Mikhail Gorbachev on February 9, 1990, then US Secretary of State James Baker’s famous “not one inch eastward” assurance about NATO expansion was one of a cascade of guarantees about Soviet security provided by Western leaders, but no agreement was signed. Post USSR disintegration in 1991, NATO adopted open door policy allowing erstwhile USSR countries to join NATO, if agreed by all existing members, which was viewed as eastward expansion of NATO and resented by successive leaders, but NATO prevailed. When such eastward expansion, after adding 14 countries, reached at consideration of Georgia and Ukraine, Putin drew a red-line, failing which Russia would have to face a direct land border with NATO at strategically sensitive area and perhaps deployment of NATO arsenal threatening Russia. It would have also made Russian Black Sea fleet redundant, thus compromising security of Russia. Russia thus reacted with annexation of Georgia, Crimea and posturing Ukraine, after it renewed its effort to join NATO, and is firm that it will not allow Ukraine’s entry into NATO at any cost.

Ukraine: Ukraine is tensed, but getting ready for confrontation knowing fully well that the recent threat is asymmetric in favour of Russia, if conflict is not prevented by diplomacy. Ukraine has a reason to feel betrayed because in 1994, ‘The Memorandum of Security Assurance’ was signed at Budapest, in which Russia, US and UK assured that its sovereignty will not be compromised, which was a major factor in Ukraine giving up its nuclear arsenal (Third largest nuclear arsenal in the world at that time) and signed NPT. Now, Russia appears to be threatening its sovereignty, and the United States and the United Kingdom are unwilling to send boots on the ground to protect it. Ukraine is not yet a member of NATO, so NATO and the US are not obligated to defend it. Instead, they are opting for the easy option of assisting Ukraine in building its capacity to fight Russians, with the threat of crippling sanctions on Russia if it invades Ukraine, which haven’t been effective in the past. Strategically and geographically, Ukraine finds itself as test bed to gauge Russian resolve against NATO having lost Crimea already, with threat of proxy war from Eastern region, even if it shelves/postpones decision of joining NATO. Ukraine continues with its demand to join NATO as its sovereign decision, although there are many NATO members, who don’t want to include it.

US: Struggling with loss of face post annexation of Georgia, Crimea and recently botched withdrawal from Afghanistan, losing footprints in most of West Asia, US wants to checkmate Russian aggressive stance by taking up sovereignty issue of Ukraine in terms of freedom to join NATO or otherwise. It however, has no appetite to put boots on ground in Ukraine, but is worried that a westward expansion of Russia can make some of the existing NATO allies vulnerable and is doing symbolic strengthening of its allies, with hardware support to Ukraine. US is also concerned that if Nord Stream 2 pipeline project succeeds many more NATO allies will be dependent on Russia, which will strategically weaken the declining NATO. It is also a test case for US-Taiwan relationship, which has almost similar equation with slight variation. If it blinks here, it loses psychological edge against China too. The US hype about full scale invasion could also be influenced of lobby of arms dealers to promote sales.

European Union (EU): EU members who are NATO allies are trying to put up a joint brave front, but the cracks are visible. EU’s 40 percent dependency on Russia is crucial to preserve its energy interest. It may be easy for Biden to say that Russian offensive will be end of Nord Stream 2, but it may not be easy for Germany to second it. The best option for them is diplomacy, which they are trying hard with inconclusive visit of French President Emmanuel Macron and the ongoing visit of German Chancellor Olaf Scholz to Ukraine and Russia with no worthwhile success so far.

China: Its happiest situation for China, as the face-off has diverted attention of US from China to Europe, to some extent. It can derive pleasure out of awkward position of US, cementing ties with Moscow as never before, at the same time test the appetite of Biden, in case it decides to invade Taiwan. It bears no obligation and can watch from sidelines playing neutral with no cost to bear.

India: India has good relations with all affected parties and can remain neutral. No country including Ukraine can criticize India for neutral stance, as most stake-holders held similar position when China violated all CBMs to enter areas, where it was not supposed to and Ladakh standoff continues. Indian concerns will include its diaspora, trade (edible oils, pharmaceutical exports etc) with Ukraine and impact of sanctions on Russia, if announced by Washington.

NATO allies and partners in Indo-Pacific like Taiwan, Japan, Australia and South Korea are also watching NATO responses keenly as the situation could replicate itself, should President Xi Jinping decide to reunify China or assert further in South/East China Sea or Indo-Pacific.

Full Scale Invasion: Strategically the cost benefit analysis doesn’t suggest a full-scale invasion of Ukraine by Russia, because NATO, which was already reluctant in admitting Ukraine into NATO has been shaken up adequately not to do so. Having achieved its major aim, annexation will be cost prohibitive in terms of casualties and economic sanctions, forcing NATO to respond directly or indirectly to avoid loss of face, without achieving anything substantial. It will unnecessarily join direct land borders with NATO, which is worse than having Ukraine as a buffer in between.

Limited Objective: Russia integrates Donetsk People Republic and Luhansk People Republic, who already treat themselves as republics, to teach Ukraine a lesson and tests NATO reaction. The cost paid by Russia will be lower than full scale invasion, but sanctions, economic cost will be almost the same. It will strengthen Ukraine’s case for induction in NATO, with sharp criticism of Russia.

Proxy War and De-escalate: There will be no additional gains for Russia. It can be loss of face for Putin with no change in probability of Ukraine’s inclusion into NATO.

NATO declares non-acceptance of Ukraine as member or Ukraine gives up demand for inclusion in NATO. In this case Putin will come out stronger and it will be loss of face for Joe Biden, loss of credibility of NATO and confidence of its allies in Indo-pacific.

Standoff continues: It may be too costly for Russia and Ukraine in terms of finances. Unlikely beyond a point.

Diplomacy Prevails: Both sides provide a face-saver to each other to de-escalate. Best option in global interest.

In all scenarios, China benefits immensely from the situation and US doesn’t seem to gain much, except some additional arms scale in case of full or limited invasion.

(Asthana is a strategic and security analyst, a veteran infantry general. He is the chief instructor, United Service Institution of India. The views expressed are personal)