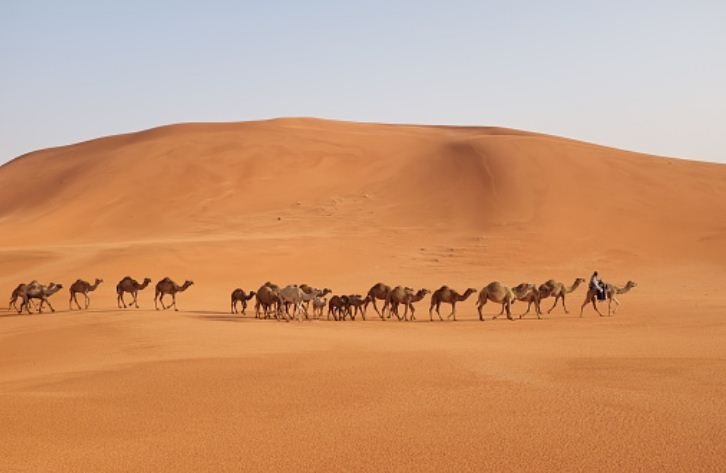 NEW DELHI, (IANS) -In the bowels of Rub Al Khali, or Empty Quarter of the Arabian desert, the sun beats down mercilessly, and at some point, the wind picks up speed as well. And if you are unlucky to be there, sand will quickly stash into your mouth, ears, and eyes. Plus, the area is exceptionally desolate. It takes weeks, sometimes months before the voice of a fellow human being can be heard.

In such harsh conditions in the desert, some Indian youth found themselves stuck as camel herders, though they were not informed about the nature of work apparently by unscrupulous agents back home.

Dablo Keshavaram, 27-year-old of UP was one of such herders. Prior to his arrival, he dreamt of working as a driver in a construction firm that was engaged in building stadiums in Qatar in preparation for the World Cup. Accordingly, he arrived in Qatar but after a few days he discovered that he would have to work as camel herder in neighboring Saudi Arabia.

Like him there are some other Indians also who were being brought on visit visas to Saudi Arabia from Qatar by their sponsors. Many Qataris own livestock and farms in Saudi Arabia. Since the end of the pandemic, the Indian embassy has helped over two dozen distressed Indian camel grazers to return home with the support of local Saudi authorities.

Like other shepherds, Keshavaram’s day also used to begin with the counting of the camels; to find any that had gone missing. This was followed by cleaning the pen, cooking lentils, and packing in a tiffin box, wrapping a gunny bag around a gallon of water. This was carried on his left shoulder, while other hand held a stick to herd the camels into the vast desert.

During the outing, no shade is available even when the mercury climbs to 48 degrees Celsius degrees. At this time the mobile signals also become errant. Like others of his fraternity, he too does not know the location in the featureless desert. The sense of loneliness is agonizing.

Owing to poverty, Keshavaram girded himself up to confront the chilly winters and the scorching desert heat. But when the delay in his salary became routine, he began to feel the pain of his harsh existence even more sharply.

As salary started to get delayed for various reasons, Keshavaram felt uneasy and approached the Indian Embassy in Riyadh through noted social worker Siddik Tanvoor of Kerala. Touched by the plight of camel herders, diplomat M.R. Sajeev contacted multiple local authorities to arrange for their safe repatriation.

Siddik, who is associated with the popular Kerala expatriate organization KMCC, volunteered to drive 3600 kilometers to go and pick up Keshavram, who was brought back to Riyadh, from where he was repatriated to New Delhi.

The story of Mahindra Pratap, a native of Maharajgunj in UP or Shaikh Abdulaziz of Khammam in Telangana is no different from that of Keshavaram. With the Indian embassy and Saudi authorities in the loop, Siddik traveled such long distances on multiple occasions whenever there was a distress call.

Hailing Saudi authorities especially police and border guards, Siddik said that “The hospitality and support rendered by Saudi authorities in the desert is excellent. Not only food but space to have rest and relaxation in the long journey is routinely offered”.