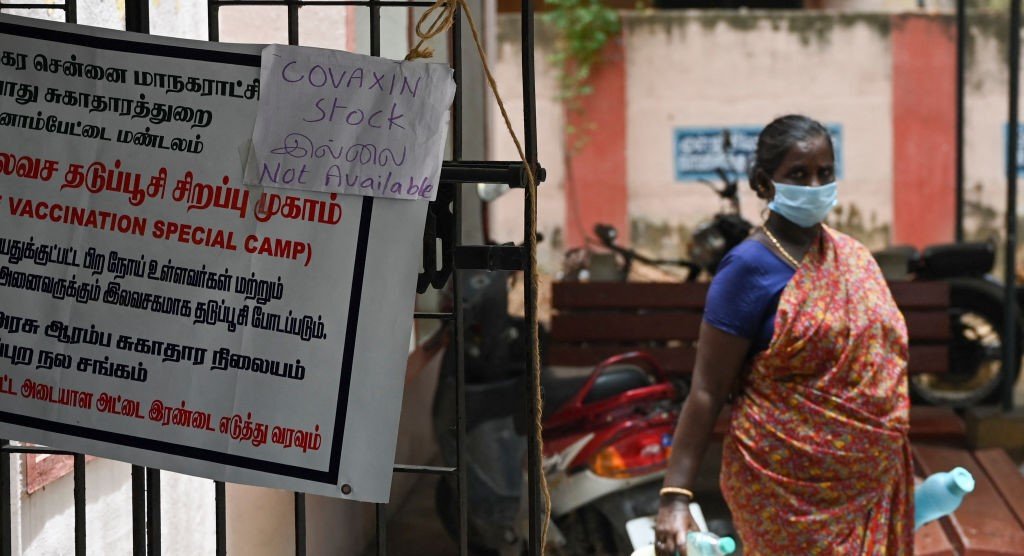 A woman walks past a notice announcing unavailability of Covaxin Covid-19 coronavirus vaccine doses due to stock shortages at a primary health center in Chennai on May 21, 2021. IMPACT and a coalition of partners launched a campaign to mobilize the Indian American community to urge the White House to send surplus vaccines to India. (Arun Sankar/AFP via Getty Images)

IMPACT and a coalition of partner organizations have launched a campaign to mobilize the Indian American community to urge the White House to send surplus vaccines to India.

“India just reported the highest single daily death toll of any country during the pandemic, while the United States will be sitting on a surplus of over 100 million vaccines,” said Neil Makhija, executive director of IMPACT, in a press statement. “We could be saving millions of lives, and instead we are bearing witness to a humanitarian crisis that will leave the United States at risk of exposure to new Covid-19 variants. The Biden administration needs to act immediately to send these lifesaving vaccines to India and take steps to end the pandemic globally. We can’t afford to wait any longer.”

IMPACT and a coalition of national partners including Indiaspora, Pratham USA, NAAIS, SAAPRI, and others will advocate in Washington, D.C. in support of the #SendIndiaVaccines campaign to galvanize the diaspora by launching a digital ad campaign, collaborating with key celebrities and influencers, and doing targeted community outreach, the release said.

While the Biden administration has taken a first step by sending aid to India and committing to share the vaccines globally, this moment requires a response proportional to the scale of the crisis, it added. The NOVID Act, spearheaded by Rep. Raja Krishnamoorthi (D-IL) (see India-West story here: https://bit.ly/3oJNrd1), would allocate $19 billion to fight the pandemic globally.

“As strong proponents of a close U.S.-India relationship, we are hopeful that the Biden-Harris administration will continue to assist India by releasing critically needed surplus vaccine supplies,” said Sanjeev Joshipura, executive director of Indiaspora.

“The coronavirus pandemic is a global scourge, and the only way we can end it is through a unified, global approach that recognizes that so long as the virus continues to spread anywhere, it’s a threat to people everywhere. That’s why I’m sponsoring the NOVID Act to dramatically expand U.S. coronavirus aid abroad to India and other nations facing major outbreaks,” said Krishnamoorthi.

IMPACT on May 18 commended the Biden administration for taking a step toward fighting the pandemic globally by sharing 20 million doses of U.S. approved vaccines, in addition to the 60 million doses of AstraZeneca vaccines.

The organization said that President Joe Biden and Vice President Kamala Harris must commit to sending a majority of these vaccines to fight the devastating humanitarian crisis in India where over half of the world’s new infections are.

“We welcome the Biden Administration’s announcement that it is sending 80 million vaccines by the end of June, but that’s all still a drop in the Indian Ocean,” Makhija said in a statement.

“With the scale of the crisis in India and the emerging variants in the region, it is crucial that most of these doses be sent immediately to India to tackle the global crisis and protect the supply chain of vaccines for the world,” Makhija added.

IMPACT organized a petition to galvanize the support of the South Asian diaspora and pressure the White House to take swift action. In response, the Biden administration sent critical aid to India, but this crisis requires a larger response from the U.S. government, said the statement.

Without a majority of the doses going to fight the crisis in India, “we run the risk of leaving beneficiary countries vulnerable and prolonging the pandemic globally,” the release said.

“It only takes one vaccine-resistant strain to set back all of the progress we’ve made to date. Committing half of the U.S. surplus vaccines to India would not only slow the spread of new variants, it would help resume the COVAX program and accelerate global immunity,” it added.

In addition to IMPACT, the Hindu American Foundation has been coordinating with the White House, Congressional India Caucus and USAID, as well as doctors and physicians who practice in both the U.S. and India.