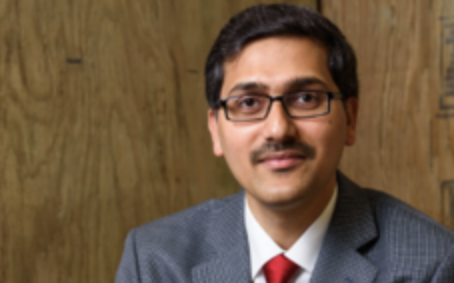 The award, considered the agency’s most prestigious award in support of early-career faculty, will provide Yellavajjala a more than $535,000 grant to fund research, hands-on learning experiences for students and outreach activities to increase the participation of Native Americans in science, technology, engineering and math disciplines, according to the news release.

“I was pleasantly surprised to learn that my proposal was being recommended for funding,” Yellavajjala said in a statement. “I spent the winter break contemplating how I can use this grant to fulfill the educational needs of North Dakota and address the research questions outlined in the proposal.”

Yellavajjala’s research develops and employs principles of experimental and computational mechanics and artificial intelligence to improve the durability and resilience of civil infrastructure.

Money from the CAREER grant will be used to extend the applicability of reduced-scale physical models to quantify the failure behavior of full-scale structural steel castings under seismic loads, it said.

“This project will lead to the generation of a wealth of new knowledge in the fields of additive manufacturing, mechanics, steel structures and artificial intelligence that will be integrated with the undergraduate and interdisciplinary graduate-level courses I currently teach, benefiting students from various departments in College of Engineering and beyond,” Yellavajjala added. “This project’s outcomes will also improve the current market share of structural steel castings, which enhances the scope for establishing new locally owned businesses generating new jobs.”

Yellavajjala joined NDSU in 2016 after earning his doctorate in civil engineering from the University of Notre Dame. He has been recognized as an outstanding educator, winning the College of Engineering’s Early Career Excellence in Teaching Award in 2019, his bio notes.

NSF awards CAREER grants to scholars who have the potential to serve as academic role models in research and education. Overall, CAREER awardees at NDSU have received more than $10 million in grants to conduct research in biology, biochemistry, chemistry, civil and electrical engineering, computer science, pharmaceutical sciences, plant sciences, coatings and polymeric materials, and veterinary and microbiological sciences, NDSU said.