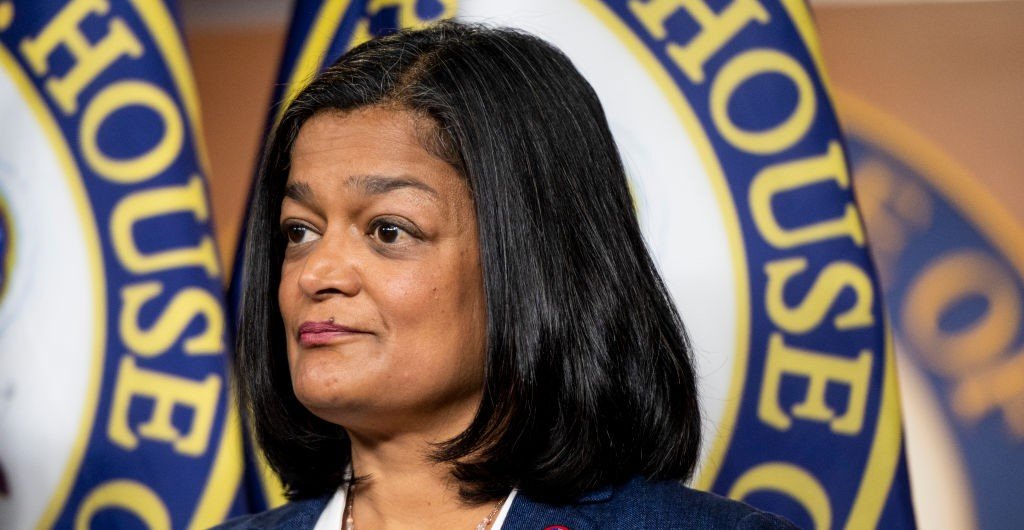 File photo of Rep. Pramila Jayapal, D-Wash., participating in a news conference in the Capitol to outline the bipartisan agenda for “A Stronger Online Economy” June 16, 2021. The Indian American congresswoman’s resolution puts forward a series of recommendations to support those affected by the hateful profiling and targeting that has occurred during the 20 years since the Sept. 11 attack. (Bill Clark/CQ-Roll Call, Inc via Getty Images)

Indian American Congresswoman from Washington Pramila Jayapal along with Ilhan Omar, Rashida Tlaib and Judy Chu, while acknowledging that thousands of individuals were unjustly targeted by the government on account of their faith, race, national origin, and immigration status in the two decades following the Sept. 11 attack, have outlined various forms of relief to support those affected by this event.

“We must fully condemn all manifestations and expressions of racism, xenophobia, discrimination, scapegoating, and ethnic or religious bigotry while also finally acknowledging the climate of hate that Arab, Muslim, Middle Eastern, South Asian, and Sikh communities have experienced in the two decades since September 11, 2001,” said the congresswomen in a statement Sept. 10. “As we acknowledge that our own government implemented harmful policies that unfairly profiled and targeted Arab, Muslim, Middle Eastern, South Asian, and Sikh communities, we must also celebrate that these very communities have met these challenges with unwavering courage, strength, compassion, and resilience while uniting in the aftermath to advocate for civil and human rights — work which continues to this day to benefit all Americans.”

The resolution puts forward a series of recommendations to support those affected by the hateful profiling and targeting that has occurred during the 20 years since the Sept. 11 attack. This includes:

Creating an interagency task force to work with community-based organizations to review these government policies, investigate and document their impact, and dismantle those policies which continue to profile and unfairly target these communities.

Holding hearings by congressional and civil rights bodies to explore the findings and recommendations of this interagency task force in consultation with and centering community-based organizations.

Allocating resources to community-based organizations outside and independent of law enforcement that center the experiences and demands of Arab, Muslim, Middle Eastern, South Asian, and Sikh communities to support the needs of victims of hate and state violence, including language support, mental health, comprehensive support, system navigation, and crisis response and recovery.

Calling on the Secretary of Health and Human Services, the National Institute of Health, and the National Science Foundation to work together to study the impact of hate, government targeting, and profiling on physical and mental health.

Arab, Muslim, Middle Eastern, South Asian, and Sikh communities have long experienced discrimination and violence in the U.S., which intensified after the attacks, noted the congresswomen, adding that this climate of hate also led to bullying and violence in their everyday lives and in their workplaces, businesses, community centers and houses of worship.

“We are hopeful that this resolution will center the accountability of Members of Congress to rescind the policies of the War on Terror and truly ensure the safety of all communities of color.” said Lakshmi Sridaran, executive director of South Asian Americans Leading Together.

“Sikh, Muslim, Arab, Middle Eastern, and South Asian communities in the United States faced not only the shock and horror of 9/11 that all Americans experienced, but then an additional wave of targeted hate and discrimination for weeks, months, and years afterwards,” said Nikki Singh, senior policy and advocacy manager at Sikh Coalition. “This resolution is an important recognition that our communities have persevered in the face of harmful bias from individuals and institutions over the past two decades–and that concrete policy action is still needed to even begin to repair the damage done.”