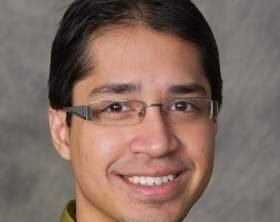 University of Buffalo researcher Souma Chowdhury has received an NSF CAREER Award. The Indian American is an assistant professor of mechanical and aerospace engineering at the UB School of Engineering and Applied Sciences. (buffalo.edu photo)

The University of Buffalo recently announced that six of its researchers, including Indian American Souma Chowdhury, have received early career award grants from the National Science Foundation or the U.S. Air Force Office of Scientific Research.

Chowdhury received an NSF CAREER Award, one of the nation’s most prestigious honors for early-career scientists and engineers.

The program provides investigators with funding to conduct research and develop educational programming in STEM (science, technology, engineering and mathematics) for K-12 students, university students and members of the public, the university release said.

“We are proud of the important work that our early-career faculty members are doing in the midst of what has been an exceptionally difficult year,” Venu Govindaraju, UB vice president for research and economic development, said in a statement.

“The research projects, educational programs and community partnerships supported by these new awards will address pressing problems facing societies around the world today, and provide an array of valuable opportunities and experiences for a diverse group of students,” Govindaraju added.

Chowdhury, an assistant professor of mechanical and aerospace engineering at the UB School of Engineering and Applied Sciences, received a grant of $500,000.

Chowdhury’s award will support his research to design teams of autonomous robots, also referred to as swarms, that can operate collectively in a predictable way and adapt to a variety of environmental conditions, the release said.

The research has implications in a wide variety of fields, including disaster response, environment monitoring, military operations and space exploration, according to the university.

Many approaches to designing the behavior of robot swarms are unable to predict how individual robots will respond when operating in a group and cannot adapt to the differing environments that they face in the real world.

Education and outreach will involve experiential learning programs such as computer gaming that will teach students how to design robots, and through the use of flying drones to monitor tree health at UB.

Chowdhury also plans to engage with local fire departments to explore the technical and socioeconomic barriers to transitioning indoor hazard localization capabilities of swarm robots to practice, it said.

Chowdhury is affiliated with UB’s Artificial Intelligence Institute, and the UB Community of Excellence in Sustainable Manufacturing and Advanced Robotic Technologies, the university said.