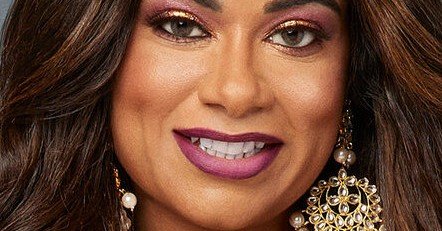 Anila Sajja is the newest cast member on the Bravo TV reality series, “Married to Medicine.”

The former corporate executive and now a mom has joined Season 8 of the show which debuted March 7. She has been married to Dr. Kiran Sajja, a successful oculofacial plastic surgeon, for eight years. The Atlanta, Georgia-based couple shares two kids — five-year-old daughter Aryana and three-year-old son Avir.

“Born and raised in Savannah, GA with a proud Indian American heritage, Anila is a renaissance woman in every sense of the word,” said Bravo TV. “Anila lives a fabulous life working hard and playing harder.”

Anila graduated from Mercer University with a degree in computer information systems and took the corporate world by storm in the cosmetic and fashion industry with a global executive position. As she advanced in her career, Anila decided to go after her true passion for fashion, and with her creative eye she blossomed it into a successful career as a fashion blogger and social media influencer, said Bravo TV.

Anila collaborates with fashion and beauty brands while lending her expertise to develop innovative content.

She runs the blog, ‘Peplum & Bubblegum,’ where she posts about all things fashion, beauty, motherhood, and hot sales.

And on the blog, this is how she describes herself: “Fashion addict – Makeup enthusiast – Married to my best friend – Mommy of two little munchkins – Food fanatic – Globetrotter – Workout junkie.”

How Anila got a break on the show: According to the Atlanta Journal Constitution, Anila, who is building a new home, shares the same designer as Toya Bush-Harris, an original member of the series. She recently gave her Instagram followers a tour of her under-construction home.

Harris and Anila lived in the same neighborhood and “we hit it off. We’re housewives. We both have kids, and our kids would play together. We really became friends after that. We’re also Aries. We have a lot in common,” she was quoted as saying by the publication.

“Married to Medicine” airs on Sundays on Bravo TV at 9/8c.