HomeIndiaNSE Scam: Money Trail Can Lead to the Mysterious ‘Yogi’ 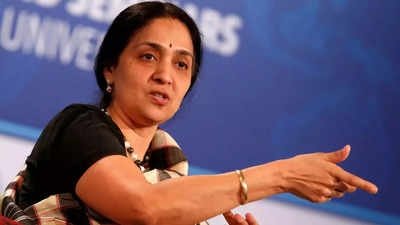 Chitra Ramakrishna’s bizarre behavior is under the scanner. (IANS photo)

CHENNAI (IANS) – While the identity of the yogi from Himalayas who had corresponded with then NSE managing director and CEO Chitra Ramkrishna remains a ‘Chidambara Ragasiyam’ or the ‘secret of Chidambaram’, speculations are rife as to the persons’ identity.

What is clear from the contents of the emails from mail id ‘rigyajursama@outlook.com’ to Ramkrishna is that the “yogi” is a person who is well versed with the NSE organizational set up, stock market operations, and having power at different levels.

The yogi also has an office in Delhi’s upmarket Vasant Vihar and is a good friend of foreign shareholders representation committee on NSE Board.

However, the money trail from the accounts of Anand Subramaniam, former group operating officer and advisor to MD, can lead to the mysterious Yogi. Interestingly Subramaniam seems to be a conduit to an unknown person to whom a substantial portion of the pay hikes were paid. This came to light from the email correspondence between Ramkrishna and an unknown person said to be a yogi in Himalayas with an email id rigyajursama@outlook.com.

One of the emails from the unknown person from the mail id rigyajursama@outlook.com to Ramkrishna and Subramaniam, as extracted by the Securities and Exchange Board of India (SEBI), states: “Subject: RE: Proposed Organization Structure with notes. ‘1. contract to revise to 5 day week only for paper and emoluments. 3 day will continue on routine with HO and rest at will. 2. One day brought additional on contract per week Kanchan to withdraw and surrender to me per month as gratitude on gross amt.”

One of the NSE controversies is the hiring of Subramaniam at a very high pay of Rs 1.68 crore in April 2013 and subsequent pay and designation hikes.

While the forensic report of E&Y had said Subramaniam is the mysterious yogi himself, the SEBI categorically rejected that view.

Legal and other experts say that if Subramaniam is accepted as the yogi, then the charge against Ramkrishna sharing of sensitive data with an outsider will not hold.

“On November 19 2015, Rigyajursama wrote an email to Chitra stating that ‘Unfortunately your company has blocked MY id from your outgoing so your msgs are not being delivered properly by mail from you’. On verbal instructions of Ramkrishna, it appears that Sanskaron Banerjee from NSE tech wrote an email internally to Narayan NeelakantanA (IT/TRC) stating: ‘Please investigate why this id rigyajursama@outlook.com is unable to send or receive emails to MD’, post which the mail was forwarded internally to allow such exchange on emails and to check the same on priority,” the SEBI order states.

According to SEBI, if the unknown yogi was Subramaniam, such internal documents need not have been sent through the email of the unknown person as the same would have already been accessible to him as Chief Strategic Advisor to Ramkrishna.

“In view of the afore said paras, I note that the E&Y report, at best, reveals that the unknown person was also well known and in close proximity to Noticee no. 6 (Subramaniam) but does not give a conclusive finding that Noticee no. 6 was in fact the unknown person who used the email id ‘rigyajursama@outlook.com’. I note from the E&Y Report that only the desktops assigned to Noticee no. 1 (Ramkrishna) and 6A were imaged/checked and the laptops assigned to Noticees no. 2 (NSE) and 6 (Subramaniam) were not available for forensic imaging as they were disposed as E-waste,” SEBI Whole Time Member Ananta Barua said in his order.

“I also note from the E&Y Report that only the official emails id’s of Noticees no. 2 (NSE) and 6 (Subramaniam) could be checked and emails sent/received to/from their private emails to the unknown person could not be accessed,” Barua said in the order.

According to the SEBI, there is no conclusive evidence or finding from the E&Y Report or the documents to prove that the unknown person who used the email id ‘rigyajursama@outlook.com’ was in fact Subramaniam.

“However, what is evident from the E&Y Report is that confidential information/data including those pertaining to NSE 5 year financial projections, dividend pay-out ratio, NSE’s business plans, agenda of NSE’s board meeting and consultations over the ratings/performance appraisalsA of NSEA employees, has been shared by Noticee no. 1 (Ramkrishna) with an unknown person/an outsider,” the SEBI order said.

The SEBI has also rejected Ramkrishna’s statement that the unknown person is a spiritual force who has been guiding her for the past 20 years and that as a spiritual force, their spiritual powers do not require them to have any such physical co-ordinates and would manifest at will.

The SEBI order also states that Ramkrishna, in her statement, told the markets regulator that she had met the unknown person at the Swamimalai temple in Delhi and also met him on occasions in holy places.

As per an email available in the SEBI order, the unknown person is a good friend of foreign shareholders representation committee on the Board of NSE and also has an office in India as seen from an email.

“E-mail dated March 02, 2015 from the unknown person to the noticee and Nawaz Patel (secretary to the MD & CEO) and subsequent reply from Nawaz Patel to the unknown person on the same date: “Hi Chitra/Navaz, I am a good friend of your foreign shareholders representation committee on your Board and would like to discuss the global trend on the dividend payout that is world vide accepted with you in person. I am on a trip to India and in Delhi on 7th and 8th March and will be happy to meet on any of these two days at your convenience. Since 7th will be a tight schedule will March 8th Forenoon work, then we will meet at Vasant Vihar Delhi at my India Office. Looking forwarding to hearing from you,” states the SEBI order.

“From Nawaz Patel to Unknown Person:”Greetings from NSE! Thank you for your email to Ms. Chitra Ramkrishna, MD & CEO, NSE. Ms. Ramkrishna will be pleased to meet you on Sunday, March 08, 2015. As regards the time and venue for the meeting we will touch base with you,” the reply mail said, as per SEBI order.

The SEBI order states: “From a perusal of the emails given in sub-para (ii) above, without unnecessarily going into the details of each email, it is evident that the unknown person is a physical being and has gone on vacations with the Noticee no. 1 (Ramkrishna) to ‘chill’.”