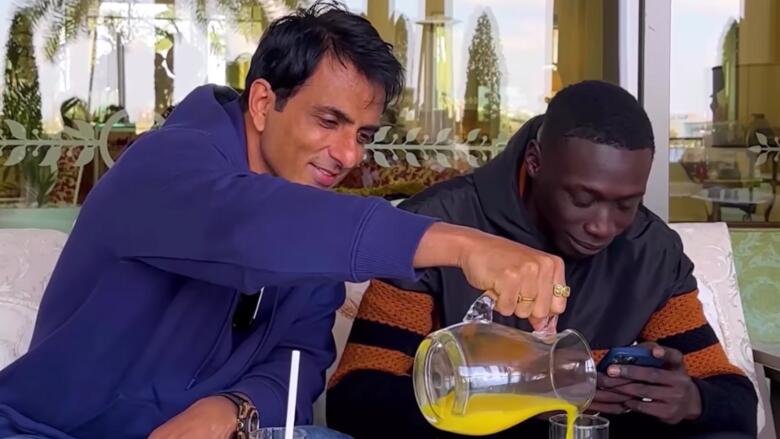 The ‘Happy New Year’ actor was seated beside the Senegalese-Italian comedian in an Instagram reel, which the latter had shared on Instagram with the caption, “When Sonu’s straw steals the spotlight #learnfromkhaby #learnwithinstagram #india @sonu_sood”.

The duo was seen with a glass in front of each of them and a jug full of juice kept beside them.

Sonu is seen pouring out most of the juice into Khaby’s glass as he looks at a phone. Only a few drops of juice are left for Sonu, which he quietly pours into his glass, which also has a sipping straw in it.

Khaby notices and seemingly moves his hands as if to offer his glass of juice to Sonu, which he kindly refuses.

However, the video’s twist comes when Khaby’s hands immediately grab the straw inside Sonu’s glass of juice and puts it in his own. He then proceeds to point to it with both his hands in his signature fashion, as if to state the obvious.

The video ends with Sonu’s frustrated expressions and sipping the few drops of juice in his own glass.

Fans went bonkers over the hilarious banter between the duo. They took to the comment section to share their reactions with laughing emojis.

“Hahahaha never play with a man’s juice!” a user wrote.

“Colder than the ice in his glass,” another user wrote.

Yet another user wrote, “A collab we didn’t know we needed”.

Meanwhile, on the work front, Sonu last appeared in the Akshay Kumar-starrer, ‘Samrat Prithviraj’. He is set to appear in the Tamil film ‘Thamilarasan’ next. He also has Abhinandan Gupta’s action-drama ‘Fateh’ on his cards.