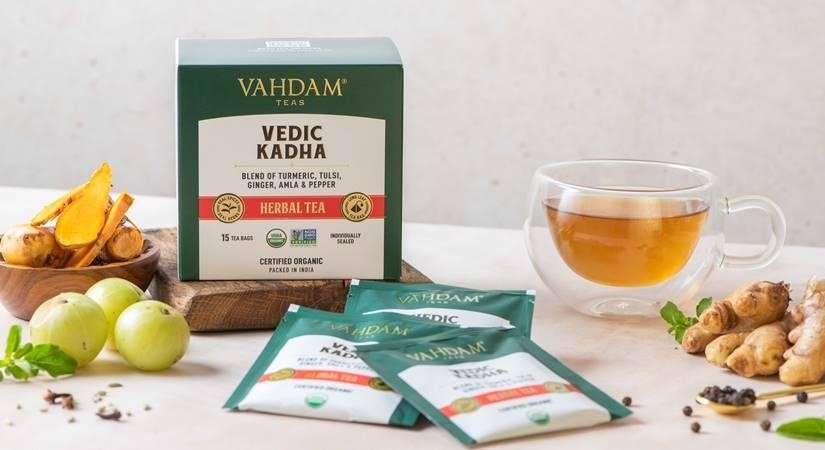 We’ve all learned over the covid years how important it is to strengthen the body’s natural defense system. If there’s one thing we’ve learned from the pandemic, it’s not to take our health for granted and that the best way to fight sickness is to strengthen our defense, i.e., our immune system.

The age-old Vedic Kadha, the mystical combination that has been a well-known part of history, is a fantastic place to start when adding immunity-boosting foods and beverages to our normal diet even if our immune system is skilled at fighting off infectious diseases.

Created by ancient sages with knowledge of herbs and spices, this decoction is used all over India as a general precaution to prevent colds and boost immunity. It is made using simple ingredients available in every kitchen. Kadha is being re-discovered by the world yet another powerfully potent superfood from the timeless tradition of ancient Indian wellness as it improves the body’s natural ability to fight common ailments. Before discussing the preparations and proportions of Kadha, let’s take a quick look at a few important benefits.

Natural adaptogen that helps in all evirating stress

This liquid is then strained and consumed.

It tastes mildly stringent with highly soothing flavors, a perfect homemade beverage to cozy up to. It has pungent notes from cardamom and hints of earthy sweetness from cinnamon and fennel. The unmistakable hit of black pepper and dry ginger immediately clears the throat.

There is no single recipe for Kadha. Everyone has their own combination of spices and herbs. That are used, depending on availability. However, generally, all Kadha recipes will include cloves, cinnamon, dry ginger, licorice, and tulsi. While making your own Kadha at home, it is important to understand why you should use certain ingredients and how they will benefit your health.

Turmeric is a well-known spice that contains curcumin. Full of antioxidants, curcumin has high anti-inflammatory properties. Turmeric also helps in fighting the free radicals in the body.

Black pepper is a powerful spice with strong anti-inflammatory and antioxidant properties. The piperine in black pepper increases the bioavailability (absorption of nutrients by the body) of curcumin and other compounds, making it the magical ingredient in Kadha.

Also called Indian Basil, Tulsi is loaded with Vitamins A and C. As a natural adaptogen, tulsi helps the body adapt to stress and anxiety. It has anti-viral, anti-bacterial, and anti-fungal properties that help fight infections internally. Tulsi helps lower blood sugar and cholesterol.

Ginger is packed with anti-inflammatory and antioxidant properties. It helps in relieving nausea and aids digestion. Ginger is also said to help in lowering blood sugar.

Made from the inner bark of cinnamon trees, this sweet spice is a powerhouse of antioxidants that boost immunity by negating the effect of free radicals in the body. It is also thought to be effective in fighting bacterial and fungal infections.

These tiny flower buds have a strong, minty taste. Cloves are loaded with vitamins, and candles have anti-inflammatory and anti-diabetic properties, and they help to improve respiration, stress relief, dental health, and blood circulation.

You can make your own version of Kadha at home using these ingredients in appropriate quantities. While it is recommended to have it daily, you can start building the habit by having 2-3 cups a week. (IANS)