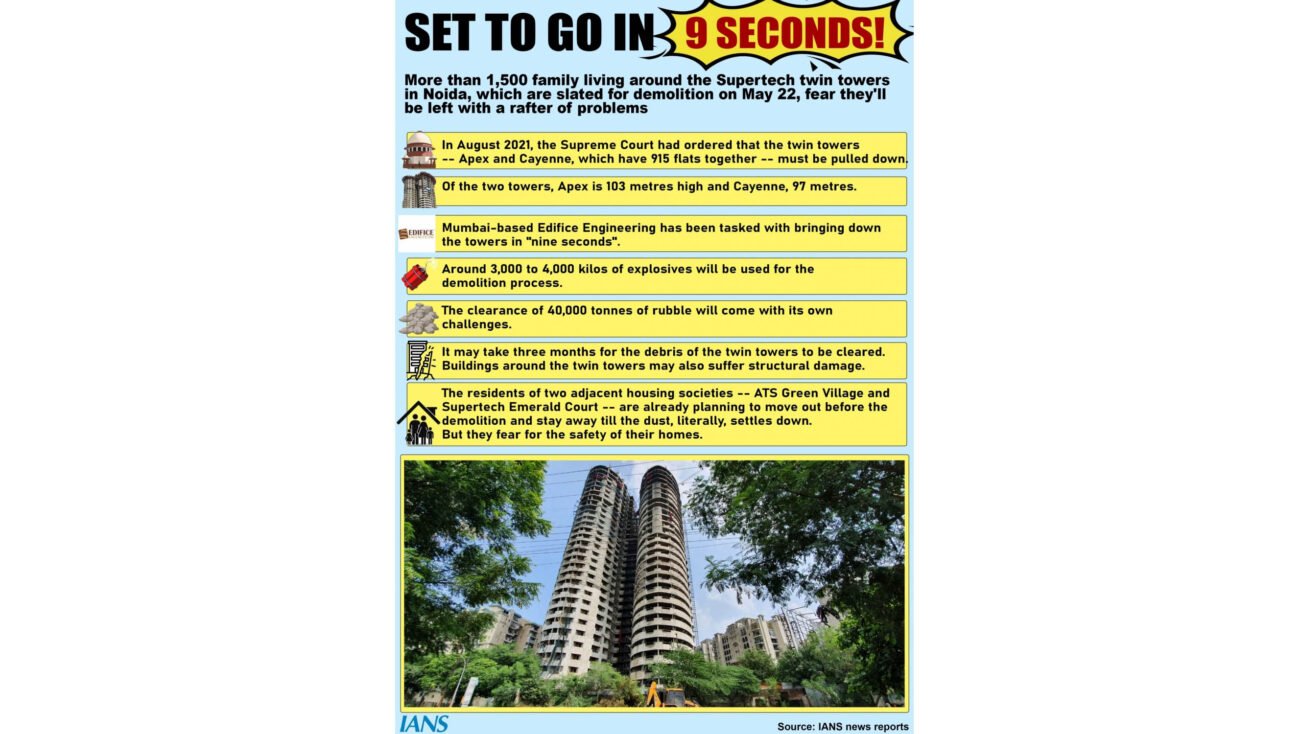 NOIDA (IANS) – You may have seen demolitions of illegal skyscrapers in YouTube videos that look stunning, fascinating too. Little do we realize that when high-rise buildings are razed to the ground in a matter of a few seconds — the sheer amount of dust and debris that fill the surroundings can make life hell for nearby residents for months to come.

As Noida braces itself to see the demolition of the Supertech twin towers in Sector 93A, a densely populated area, on May 22, the local residents are a worried lot, and angry too as they will have to deal with approximately 40,000 ton of rubble.

In its August 31 judgment last year, the Supreme Court had ordered the demolition of the twin towers, Apex and Cayenne, with nearly 915 flats.

Edifice Engineering, a Mumbai-based demolition agency, has been tasked with bringing down both the towers in approximately “nine seconds”.

Those “nine seconds” are going to choke people, especially those who are already suffering from respiratory illnesses, in nearby societies and markets.

The residents of the two adjacent societies, ATS Green Village and Supertech Emerald Court, have already planned to move out during the demolition days, and some are even shifting out permanently, as the blast can weaken the foundation of their homes.

“It will lead to a lot of health complications due to the dust and debris. Imagine around 4,000 kg of explosives going off. The air around would be so toxic. As it is, the dust has been hanging around as parts of the walls are being demolished for many weeks now,” author-journalist Ramesh Menon told IANS.

Clearing the debris of these two towers will also take a long time and while it continues, there will be dense dust around.

“It will certainly lead to respiratory irritation and those suffering from asthma will find it very difficult. The demolition may also damage the buildings nearby. No one knows how serious it would be as such a thing has never been done in an area where there are hundreds of flats in the vicinity,” he lamented.

Nearly 1,500 families live in the close vicinity of the towers which makes a rough estimate of around 6,000 people that will have to leave the area in advance for their safety and security.

According to Pratap Chakravarty, a resident of Supertech Emerald Court, the pre-demolition exercise involving 200 workers and heavy machinery “is leading to environmental concerns for Emerald Court and ATS Village and inhabited blocks near ground zero are facing the brunt.”

“The RWAs of the two affected societies are helpless in mitigating the problem. Three Emerald Court towers are closest to the demolition site and many flat owners are now insuring their property,” Chakravarty told IANS.

The residents have been told that there is going to be a five-six hour evacuation period. However, the real problem starts after the demolition.

Edifice Chief Executive Utkarsh Mehta said that it might take three months to clear the massive debris of the twin towers.

“It is not that it will be razed in exactly 9 seconds. In my 40 years of practical experience, we have done several demolitions in the past and with a building of that height I believe it should not take more than 9 seconds,” he had said.

“Tentatively, around 3,000-4,000 kgs of explosives will be used for the demolition process,” he added.

Of the two towers, Apex is 103-metre high and Cayene is about 97 meters.

According to Menon, it is a heavy price to pay for thousands of those who invested in those illegal flats and for those who live nearby.

“But when you see the larger picture, it is something that had to happen as it was blatantly illegal. It violated numerous laws. By ordering its demolition, the Supreme Court sent out a clear message that builders and real estate companies cannot just get away by violating the law or brushing away genuine complaints of buyers,” he emphasized.

The residents said that this is a good lesson for the Noida Authority to now ensure that they stop such illegal buildings before they are built to save its reputation.

The repercussions of the twin tower demolitions will be felt for months to come.

“Some residents have relocated and others are planning to do so because even if the demolition goes according to plan, clearance of 40,000 tons of rubble will come with its own challenges,” added Chakravarty.

For millions watching the tearing down of the twin towers from the comfort of their homes will be an awe-struck moment; for those living nearby, it is going to be one hell of a demolition.