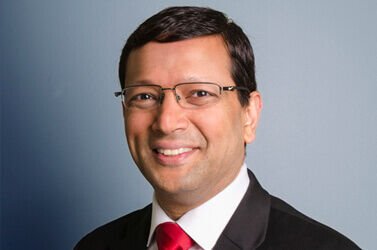 Jayesh Shah, Indian American past president of AAPI and chair of the 2022 Convention. (photo provided)

In her welcome remarks, Gotimukula provided a brief history of AAPI, stating how AAPI’s mission has evolved in the past 40 years. “Today, AAPI is strong representing over 100,000 Indian American physicians, 130 local chapters, who make up of 10% of total physicians in the U.S.”

Jayesh Shah, past president of AAPI and chair of the 2022 AAPI Convention 2022 said, “We have convened a fantastic group of people to meet the needs of the 2022 convention and are very excited about this year.”

The convention will be held at the Henry B. Gonzales Convention Center and the facility will afford an intimate setting that will facilitate AAPI’s ability to convey cutting-edge research and CME, promote business relationships, and display ethnic items, Shah noted.

In his felicitation address, Aseem Mahajan, Consul General of India in Houston, said, “Honored to be part of the virtual curtain raiser.” He also referred to the significance of “India and the United States, the two most vibrant democracies, representing two great multicultural societies with shared values, who are natural partners” working together in several areas of interest to both the nations, including immense opportunities for collaboration in healthcare between the U.S. and India.

Welcoming AAPI delegates to San Antonio, the city’s mayor, Ron Nirenberg, said, “2022 is most exciting time to be in San Antonio, which hosts one of the largest Diwali celebrations in the United States.”

Confirming his presence at the convention, Sunil Gavaskar said, “It’s a unique honor to be part of the important AAPI convention in Texas.”