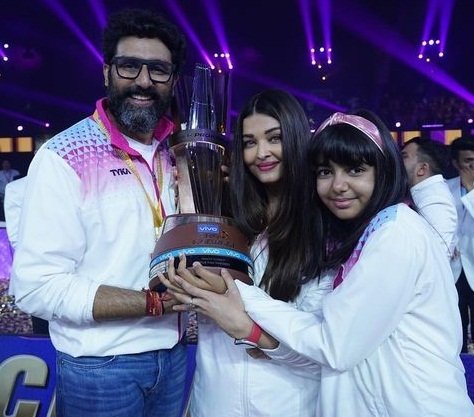 MUMBAI, (IANS) – Jaipur Pink Panthers, which is owned by Abhishek Bachchan, has clinched the trophy for Season 9 of the Pro Kabaddi League. As his team brought home the trophy, the actor shared pictures from the match.

Jaipur Pink Panthers won the league again 9 years after their debut. Sharing his pictures with his team, the management, and his family, Abhishek wrote: “So proud of this team. They quietly worked towards this cup. Despite criticism, they kept believing and working. Everybody wrote them off … But they had confidence in themselves. That’s the way to do it.”

He added: “It’s taken us 9 years to win this cup again. And I’m so happy with this team. Teamwork, hard work and silent determination. … The @jaipur_pinkpanthers way.”

Sikandar Kher, who was recently seen in the streaming movie ‘Monica O My Darling’, was also spotted sitting with the Bachchan family and cheering for Jaipur Pink Panthers.