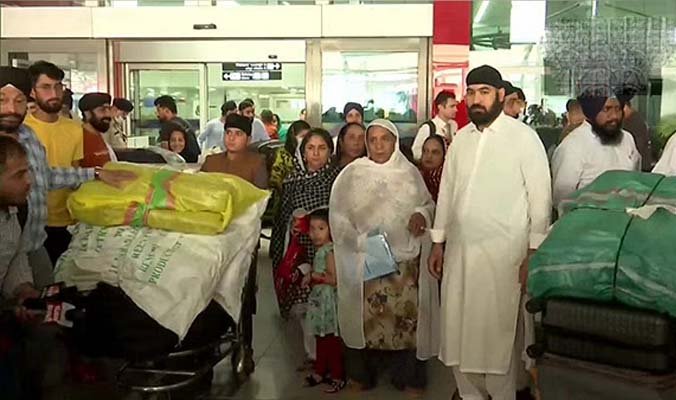 NEW DELHI. (ANI) – In an emotional testimony, a 62-year-old woman who is a victim of religious persecution in Taliban-ruled Afghanistan narrated the ordeal of being called ‘Kafir’ after living in Afghanistan for three generations. On August 3, a total of 28 more Sikhs including women, children, and infants, arrived at Indira Gandhi International Airport from Kabul.

Surjeet Kaur, who arrived along with her three-year-old granddaughter and other family members said that it has become difficult to survive in Kabul where they have lived there for three generations.

“Whatever be the situation in Afghanistan, but Sikhs were never targeted. We have lived here peacefully for generations, but things have worsened after the Taliban took over,” she said.

Religious minorities in Afghanistan, including the Sikh community, have been a victim of repeated targets of violence in Afghanistan after the Taliban took control of the country.

“Situation was bad, what to say. We left everything there, we don’t want to get killed there,” said Harbans Kaur and Jagtar Kaur.

All of them said that for the last year they had been staying in the Gurudwara because it is unsafe to live outside but on June 18 Taliban attacked Gurdwara Dashmesh Pita Guru Gobind Singh Karte Parwan too.

Another Afghan Sikh, Manmohan Singh said that he doesn’t want to talk about the situation that he and his family has suffered in Kabul. “Our lifetime savings have been destroyed in a couple of months. Fearing for our life, we have just fled leaving behind all memories, home, and business. We will make a fresh start in India with the help of the Indian Government,” said Singh.

“I had to come here as there were no jobs there. Around 100 more Sikhs are stranded there. I would like to thank Prime Minister Narendra Modi, SGPC for flying us back safely here to India. We would like to settle in India now,” said Manmohan Singh.

The airfare of this group of Sikhs as well as 32 evacuated earlier has been borne by the SGPC.

It has been informed that 110 remain in Afghanistan and 61 e-visa applications are pending with the Government of India for issuance. The evacuees have been accommodated in Gurdwara Sri Guru Arjan Dev Ji in Tilak Nagar, New Delhi. They are likely to be rehabilitated by World Punjabi Organization, Sobti Foundation, and other social organizations.

There were about 700 Hindus and Sikhs in Afghanistan in 2020, but many them left the country following the Taliban’s takeover on August 15, 2021.