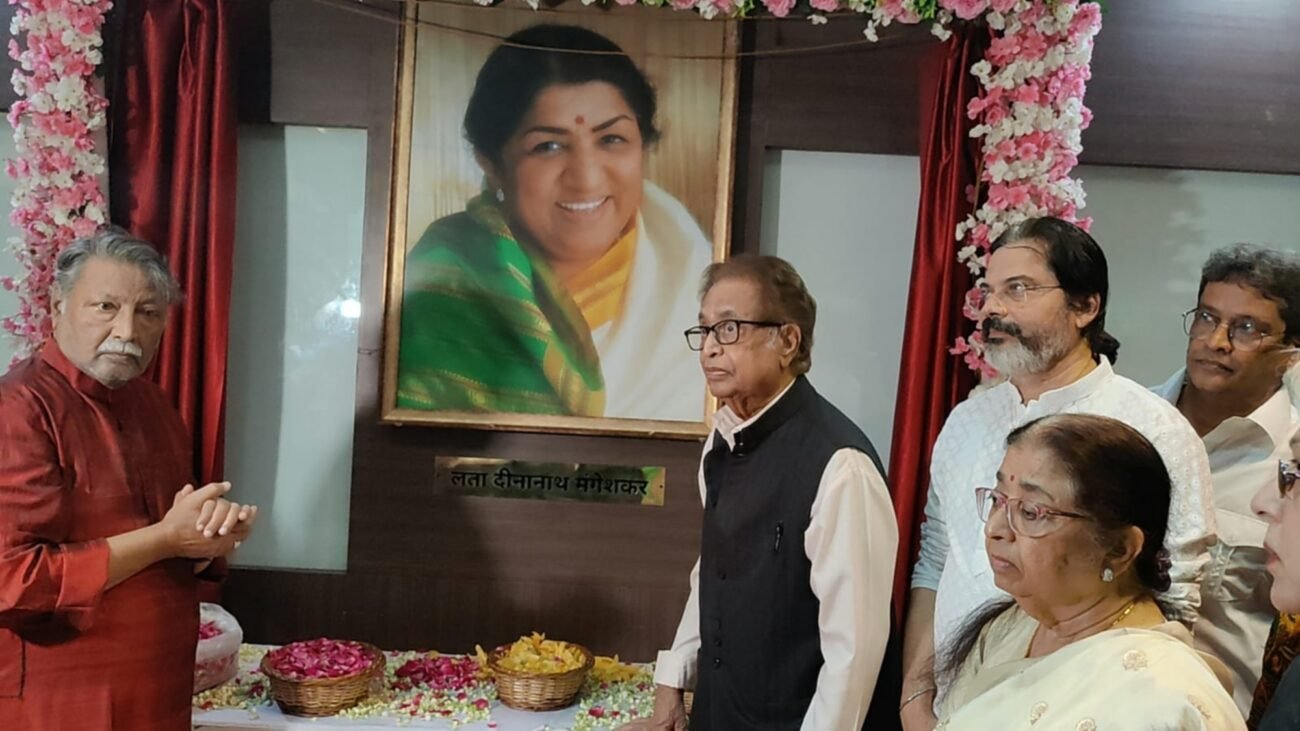 MUMBAI (IANS) – Nearly seven weeks after the legendary singer, Lata Mangeshkar passed away into eternity, her brother and sisters and other relatives feel they have become ‘orphans’.

Emerging in public on Mar.29 for the first time after Lata Didi’s passing, Hridaynath Mangeshkar, Asha Bhosle, Usha Mangeshkar and others joined for a proud yet emotional moment at the Master Deenanath Mangeshkar Auditorium in Vile Parle – the unveiling of a large colourful portrait of their beloved sister.

The portrait of a smiling Lata Mangeshkar was unveiled by a close family friend of nearly seven decades, well-known actor Vikram Gokhale, moving to tears the assembled Mangeshkar clan who yearned for their beloved and eldest Didi, who left them on Feb. 6.

Inaugurating the portrait, Gokhale recalled how his father and the Master Deenanath Mangeshkar families were related for centuries.

“We used to address him as ‘Dinaa ba’… Our families had a very close relationship and he was also my father’s ‘Guru’. He had presented a musical instrument to my father on which he would do ‘riyaaz’ (practice) for hours,” said Gokhale with moist eyes and voice choking.

Asha Bhosle confessed how Lata Didi’s sudden passing was a huge shock and pain to her and the entire family.

“Whenever I used to go anywhere, I would always take Lata Didi’s blessings. She would ask me ‘not to touch her feet always, as her blessings and that of our parents’, are forever with me, wherever I am and whether I went to her or not,” said Bhosle in a moving tribute.

The sole brother, music director Hridaynath Mangeshkar said Lata Didi’s passing has proved to be sad and devastating for the entire family, and said “we still can’t believe she is no more” with us.

“I had seen our father’s picture in this auditorium and in four theatres in Pune. I never imagined a day would come when I would have to witness the unveiling of our sister’s (Lata Didi) photograph besides our father. It causes a lot of anguish,” said Hridaynath.

The family will put up large-sized pictures of Lata Didi at the four theatres in Pune and also plan to construct memorials for her at various places.

Asha Bhosle wondered that after Lata Didi’s departure, “whose blessings should I seek, who should I turn to for my problems.”

“When we were very young and our Baba (father, Deenanath) expired and then our Mai (mom Shevanti) also passed, it was Lata Didi who cared for us as parents. After her departure we have all been rendered as orphans. We never thought it would happen like this and could have lived for many more years,” said Bhosle.

The family members said that Lata Didi will “continue to inspire us all” and the future generations would feel blessed by her photos hanging on the auditorium walls in Mumbai and Pune.

This is the first time the entire clan came together for a public event after Lata Didi’s passing on February 6, followed by her public funeral at Shivaji Park that day and then the post-funeral rituals at Nashik after four days.