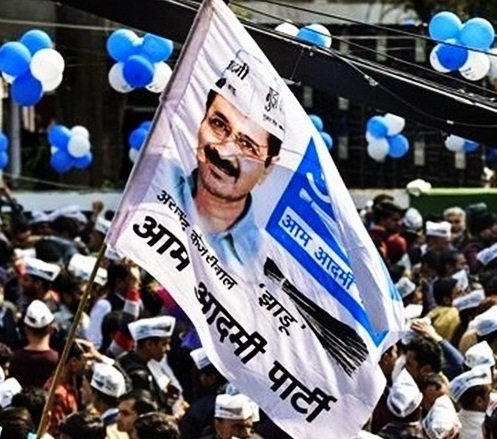 NEW DELHI, (IANS) – After the Gujarat assembly polls, the Aam Aadmi Party got into a celebratory mode to welcome the achievement of national recognition.

AAP convenor Arvind Kejriwal in a video message to party workers said, “Aam Aadmi Party has got about 13 percent votes in Gujarat…This time we have succeeded in breaking the fort, next time we will win the fort”.

“Through the votes of Gujarat, the Aam Aadmi Party is becoming the national party. For the first time, politics based on education and health is getting recognition in the country. Congratulations to the people of India”, senior AAP leader Manish Sisodia said in a tweet.

With the AAP’s government in Delhi and Punjab and recognition as a state party in Goa, the AAP has also achieved the status of a state party in Gujarat by securing five seats and 13 percent vote share, which is enough to be recognized as a ‘national party,’ the ninth in the country.

“Thanks to the miraculous leadership of CM Arvind Kejriwal, Aam Aadmi Party has become a national party in just 10 years. Aam Aadmi Party is no longer limited to Delhi and Punjab but has become the national party of India. Gujarat is called the fortress of PM Modi and Amit Shah, Kejriwal has breached their fortress today”, said senior AAP leader Sanjay Singh while commenting on this. He said that ten years ago the AAP was formed, till now the people of Delhi formed our government thrice in Delhi and now we have our government in Punjab also”.

After getting the national party status, important advantages among others will include that its symbol broom will be reserved for party candidates across the country.

AAP candidates will now appear on the top of EVM alphabetically and may also get office space in the heart of Delhi and the party can include as many as 40-star campaigners instead of the usual 20.

AAP state convenor Gopal Rai in a function at the party headquarters said, “despite being pressured by other political parties to not vote for us, Gujarat gave us their love and support. As many as 35 lakh people across the state supported us and due to this today, we have become a national party.”

“When we were on a protest against corruption in Delhi under the leadership of Anna Hazare, the ruling Congress party at the time promised that they would bring the Jan Lokpal Bill. They eventually failed on their promise, and we were challenged into getting into politics. Congress said that if you are serious about bringing changes to this country, fight an election and come to power. When we finally decided to take the political plunge, it was unimaginable to think that this is where we would be 10 years later”, Rai said.