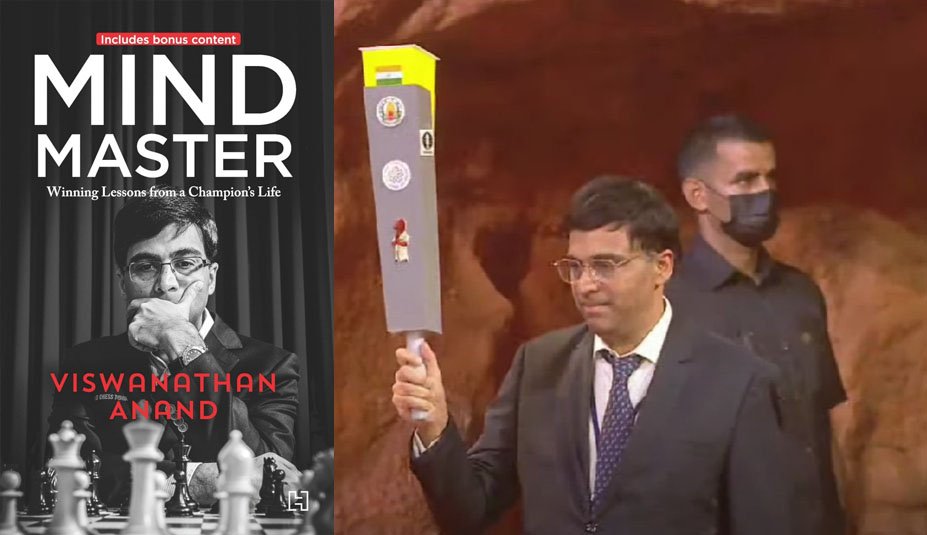 NEW DELHI, (IANS) – Cool as a cucumber. That’s five-time World Chess Champion Viswanathan Anand. Cooped up in Germany due to the Coronavirus pandemic, he returned home via a Vande Bharat repatriation flight, coped with the loss of his father, learned Hindi, and had the satisfaction of launching the WestBridge Anand Chess Academy to nurture India’s chess prodigies – and is chuffed at the stimulating aspect of mentoring.

“My approach towards the pandemic was not to fight the outlandish situation kicking and screaming but to flow with the current without overthinking and making myself miserable. None of us could have been better or worse prepared for what we were up against,” Anand writes in the bonus chapter of his memoir, ‘Mind Master: Winning Lessons from a Champion’s Life’ with Susan Ninan (Hachette), which has been reissued as a paperback edition to mark the 44th Chess Olympiad that opened in Chennai on July 28.

The Olympiad will see the participation of 343 teams from 187 countries, with 30 players from India matching their skills against the best in the world under Anand’s mentorship.

“When I look back at the worst days of the pandemic, I realize the learnings have been plenty. I’ve been forced to cope with the loss of a parent and that has drawn me closer to my family. When I peep into (son) Akhil’s room I see a child trying harder than the rest of us to accept the reality of online classes and his friends being turned into tiny picture panels on the screen…I catch the proud smile on his face when my achievements appear as questions in his school assignments,” Anand writes.

Reminiscing about his father, who in his early years “doubled up as my manager and had to deal with a youngster who was trying to break free and discover himself”, he writes that in his last years, the elder Anand’s Sunday afternoons were spent in the company of his grandson over ice cream scoops.

The pandemic, he writes, presented two options: mope about not knowing what lies ahead “or find an opportunity in the unexpected gift of time. We had all the time in the world, with no flights to catch and no office rush to beat. I asked myself what I always wanted to learn but had put off for later”.

“Turns out, the answer was Hindi. I had never found the time earlier to learn the language. In my years of living in Madrid, when I’d learnt Spanish by conversing with locals, I had never been embarrassed to make mistakes. With Hindi…well…it was different. My ignorance of the language meant I felt more lost in Delhi or Mumbai than I ever did perhaps even in Frankfurt (since I read, write, and speak German reasonably fluently). I found it strange because I wasn’t supposed to feel this way in my own country. It formed the premise of my motivation to take up Hindi lessons. I defined it as being able to survive an Indian airport,” Anand writes.

“He took the job upon himself, and we began having regular classes over Skype once a week. Thereafter, it was him helping me with my Hindi and me fixing his chess,” Anand writes.

The WACA project dates to 2019 when Anand had been invited by the Bengaluru-based investment firm WestBridge Capital to deliver a talk for their employees and the company’s co-founder Sandeep Singhal asked him if he’d be interested in a chess collaboration of some sort.

“One of the first thoughts that popped in my mind was the Botvinnik Chess School in Moscow,” the brainchild of a former World Champion that had helped raise a generation of players, famously Gary Kasparov, Vladimir Kramnik and Anatoly Karpov, all of whom later became world champions,” Anand writes.

It was initially set to launch in April 2020, got pushed to December of that year due to the pandemic and was formally launched in 2021.

“It was an idea, if not a burning dream that I had always carried in my head. I know I would do it one day but had never got around to putting it together. The association with WestBridge for the academy was unplanned, almost serendipitous. I was chuffed at the stimulating prospect – to work with young minds, see the chess board through their eyes and gain a modern perspective on the game,” Anand writes.