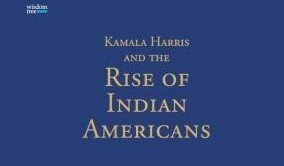 The cover of the new anthology, “Kamala Harris and the Rise of Indian Americans,” edited by veteran journalist Tarun Basu. (photo provided)

Several Indian American business leaders, academics, and journalists who had each contributed a chapter to the new anthology, “Kamala Harris and the Rise of Indian Americans,” were featured at a virtual book launch July 29 evening, organized by Indiaspora.

“We gathered an amazing galaxy of authors in less than a year,” said veteran journalist Tarun Basu, who edited the collection of essays. This book was not only about the shining of Indian Americans but also looks at the challenges our community has faced.”

Basu is the founder of the Indo-Asian News Service. The veteran journalist, media commentator and policy analyst served as the editor of IANS until 2015. He now helms a think tank, the Society for Policy Studies, which runs the South Asia Monitor, a resource and policy forum on South Asia, and also publishes a policy journal, the India Review & Analysis.

The book was released July 15 by New Delhi-based publisher Wisdom Tree and is available in the U.S. via Amazon. Basu describes the book as an “eclectic amalgam of perspectives on the emerging Indian-American story.” Harris’ meteoric rise from San Francisco district attorney to California’s attorney general, then senator and subsequently vice president has put the spotlight on the Indian American community and sparked its political engagement.

While many of the chapters focus on the success of Indian Americans in business, politics, and philanthropy, Shamita Das Dasgupta, co-founder of Manavi, which addresses domestic violence, challenged the narrative of the uber-successful community. “This lens has notably excluded women, non-conformists, the LGBTQ community, and the poor, along with the change-makers who are working in those communities,” she said.

“The model minority label is obsolete. It can only be used by suppressing the voices of the marginalized, and has pitted communities against each other,” said Dasgupta, who wrote the chapter, “Success Through the Lens of Women: Celebrating an Alternative Model of the Marginalized,” with journalist Sujatha Warrier.

Maina Chawla Singh, Scholar in Residence at the School of International Service at American University in Washington, DC, said at the launch that she started to see the rise of Indian American political engagement sometime around 2012, as millennials started to become involved in campaigns.

Chawla Singh wrote a chapter for the book titled, “A Community Zooms Into the Political Spotlight,” which noted that the first substantive wave of Indian Americans through the last three decades of the past century focused largely on building businesses and temples and rarely strayed into politics.

But that changed as their children became adults. “I was able to see a different perspective emerging,” said Chawla Singh, noting the many Indian Americans who have run for state and local office, and the birth of the “Samosa Caucus” in Congress: Reps. Ami Bera and Ro Khanna, both Democrats from California; Pramila Jayapal, D-Washington; and Raja Krishnamoorthi, D-Illinois.

Indian American businessman Raj Gupta, who wrote a chapter titled, “Success Drivers of Indian-American CEOs: Fostering a New Wave of Corporate Leadership,” said it took the community years to get validation in the U.S. business world.

“Indian Americans were curious objects. We were asked ‘why are you here?’” he said. Technology, however, allowed the community to find its footing, he said, noting that Indian Americans continue to be on the forefront in the merging of business and technology. “We are known for our ability to connect the dots, to broadly see the world, and to take risks,” said Gupta, who worked his way up the ladder at the Philadelphia, Pennsylvania, corporation Rohm and Hass, starting out as a financial analyst in 1971, and became the chairman and CEO in 1999. He is known as one of the 10 most influential Asian Americans in business.

Indiaspora founder MR Rangaswami predicted that the next wave will consist of companies launched in India which subsequently move to the U.S. He noted the drove of Indian unicorns — privately-held companies with valuations of over $1 billion — which are based in the U.S.

Deepak Raj, who serves on the board of directors of Pratham USA, discussed the rise of Indian American philanthropy, noting that an ecosystem is developing for greater participation in charitable giving. Raj discussed the India Philanthropy Alliance, a collection of 14 U.S.-based organizations working towards humanitarian and development goals in India, and Indiaspora’s ‘Chalo Give’ platform, which aims to encourage Indian Americans to donate at least 1.5 percent of their incomes to charity.

Bijal Patel, chairman of the California Housing and Lodging Association, discussed how hoteliers have stepped up amid the COVID pandemic, sheltering the homeless population via California’s Project Roomkey, and providing permanent housing via Project Homekey.