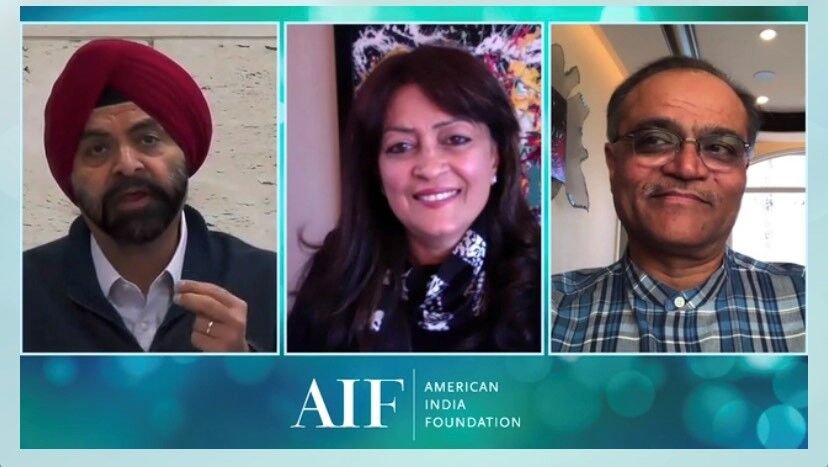 Additionally, as AIF marks its 20th anniversary, co-founder and AIF Board co-chair Lata Krishnan and her husband Ajay Shah announced the largest gift to AIF in its history, a $5 million gift to the Fellowship program in a fireside chat with Mastercard executive chairman Ajay Banga.

Building on the legacy created over 20 years, the gift carries a bold vision for the future, said an AIF news release, adding that the next phase of the program focuses on accelerating impact and supercharging ideas to solutions.

“Through service we have made investments in American Indian diplomacy

by shaping the next generations of leaders to be more inclusive and socially minded advocates who will collaborate to solve the most pressing issues in India. We are impacting individual lives and building bridges, this is what motivates me year after year with AIF,” Krishnan said.

“We are building young leaders who will be able to sustain development throughout their entire careers. The relationships and bridge-building go well beyond the one-year Fellows stay on the ground,” Shah said.

Announcing the new name, the AIF Banyan Impact Fellowship “will invest in a cross-generational force of change makers building an equitable and sustainable world,” Krishnan added.

The Indian American entrepreneur said the “banyan tree is a symbol of strength, resilience, and interconnectedness – a powerful metaphor for mobilizing a collective force towards sustainable impact.”

Nishant Pandey, AIF CEO, said the Fellowship is the longest running program of AIF and is celebrating its 20th anniversary this year as well.

“From our 20 years of running this strategic program in the U.S.-India corridor, we believe the program is at a crucial stage where it can expand, grow and flourish as a separate entity within the AIF umbrella. This seed grant of $5 million from Lata and Ajay helps us pursue this exciting vision. This is the biggest gift in the history of AIF and we are immensely grateful and thrilled,” Pandey said.

“Our hope is for the U.S. and India to form a much tighter partnership so that their people understand each other better and can contribute to solving real problems in each other’s countries,” Banga said at the event. “Through this fellowship, we are creating a force multiplier.”

The evening showcased the organization’s Learning and Migration Program, which offers children of migrant workers a chance to quality education to break the cycle of intergenerational poverty.

According to a UNICEF study, 139 million migrant workers leave their villages in search of seasonal work, uprooting their families to earn daily wages in the brick kilns of Andhra Pradesh or the salt mines of Gujarat, the release said.

Of these, one in five are children out of school. Of these children, more than half account for girls. Of this group of girls, half were reported to be married between the ages of 10-19, it said.

Since launching the LAMP initiative in 2009, nearly 600,000 children have received wrap-around services in seasonal hostels to stay in school and continue their education, the release adds.

Attendees heard from two inspiring beneficiaries, Khusbu Mahanand and Lachhaman Dundi, who were both child migrants from Nuapada, Odisha prior to joining the seasonal hostels offered by AIF.

Mahanand has now become the first woman in her village to get a college degree, in chemistry. Romesh Wadhwani, an IIT alumnus himself who was inspired by Dundi, introduced him. When Dundi first learned about inventors and scientists in school, he decided to follow in the same tracks. He is now on track to get a degree in physics from a local college with several inventions and patents already under his belt. He is also a prolific entrepreneur and has recently joined IIT Bhubhanshwar’s Startup Incubation Program, the release said.

The American India Foundation is committed to catalyzing social and economic change in India and building a lasting bridge between the United States and India through high-impact interventions in education, livelihoods, public health and leadership development, with a particular emphasis on empowering girls and women to achieve gender equity, the release said.

Working closely with local communities, AIF partners with NGOs and government to develop and test innovative solutions and with governments to create and scale sustainable impact.

Founded in 2001 at the initiative of President Bill Clinton following a request from Prime Minister Atal Bihari Vajpayee, AIF has impacted the lives of 6.7 million of India’s poor in 26 states.