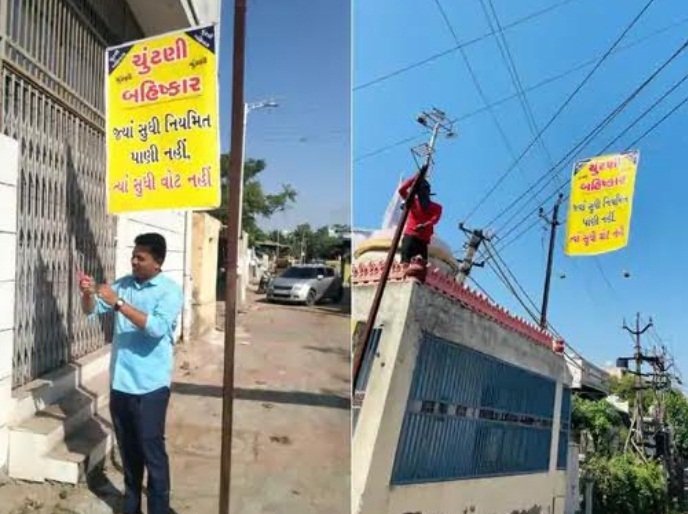 AHMEDABAD, (IANS) – The residents of Ahmedabad‘s Nana Chiloda have decided to boycott the Assembly elections whenever they are held to protest the government’s apathy.

Two years ago, Nana Chiloda was a village until it was merged into the Ahmedabad Municipal corporation. The villagers say that the corporation has failed to provide them with the basic amenities, forcing them to come to the decision.

The people have put up posters and hoardings in the village.

Rahul Thakur talking to the media said, “Since the last two years villagers are demanding drinkable water, new school buildings, as the present building is in a dilapidated condition, drainage lines, but none of these demands have been met by the corporation. So, the villagers have unanimously decided to boycott the Assembly elections and will not allow any political party or their workers or leaders to campaign here.”

He complains that in the girls’ schools there is a classroom shortage, because of which 60 to 70 students of two to three classes must sit together. For the primary school building, a tender was passed, and a contract was allotted, but work has not yet begun even after two years.

“It is the decision of the village that we will not vote for any candidate till the basic amenities are not provided to the village,” said Thakor.

Even Sardarnagar area corporator Chandraprakash Khanchandani admitted before the media that “seven to eight months ago, the foundation stone was laid for the primary school, but the building contract was canceled, so school building work is delayed, drainage laying work is going on”.