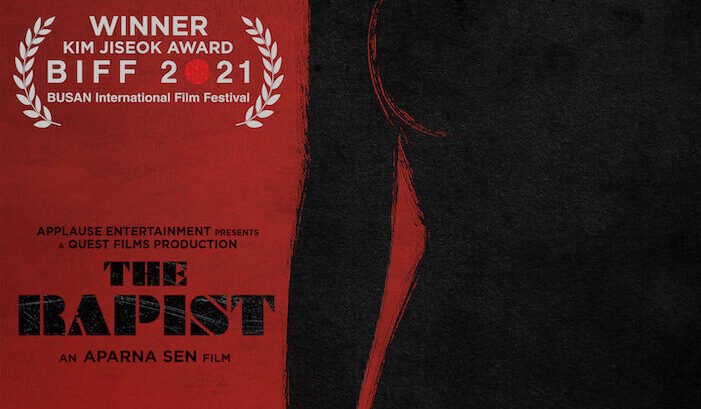 The film had its World Premiere at BIFF 2021 in the “A Window on Asian Cinema” section and was one of seven films nominated. In a fiercely competitive year for the award, this win comes as a major triumph for the makers of the film.

“The Rapist” deals with the complex themes of crime, punishment and restorative justice through the prism of class dynamics. It chronicles the journey of three protagonists and how their lives get entwined because of one horrific incident. The film is an unflinching, uncompromising portrait of sexual violence, its aftermath, and the socio-psychological fallout for both the survivors and perpetrators of the crime.

Marking the reunion of the prolific mother-daughter duo of Aparna Sen and Konkona Sen Sharma, “The Rapist” also has Arjun Rampal and Tanmay Dhanania in key roles. It received rave reviews at the festival, with several critics calling it one of Sen’s finest works. The film also marks Applause Entertainment’s feature film debut, and this prestigious honor at Busan signals a fine start at the movies for the studio.

Eminent director-actor-writer Aparna Sen, elated after the win, said, “I feel deeply humbled, grateful and overwhelmed as I accept this prestigious Kim Jiseok award. I would like to thank everyone at Busan IFF, the jury, the organizers and of course, the audience for conferring this honor upon me. This award has a special significance for me because I was in Busan as a jury member many years ago and I had the honor of meeting Mr. Kim in person. I was aware of Mr. Kim’s tireless, lifelong effort to promote Asian cinema throughout the worId. I take this opportunity to thank my producers, Applause Entertainment and Quest Films, who put their might behind me and supported me all the way. And of course, my very talented cast and crew who helped me make my vision a reality.”

Sameer Nair, ceo of Applause Entertainment said, “We are jubilant to learn that our first feature film, directed by the incredible Aparna Sen, has received this distinguished honor. To be nominated among such a fine list of films was a privilege, and this win reaffirms the faith we had in Aparna’s story since we first heard it. We’re happy to have partnered with Quest Films and are hopeful that the esteemed Kim Jiseok award at Busan will help take the film to a wider, global audience.”

Suchhanda Chatterjee and Shubha Shetty of Quest Films Pvt. Ltd. said, “We feel thrilled and honored at being a part of a film of this kind. With the kind of story it has and knowing the passion with which Aparna works, this will be a film that will be remembered for a long time. Winning the prestigious Kim Jiseok award just makes us believe it all the more. We are thankful to Applause for backing our dream project.”

Widely acknowledged as the largest film festival in Asia, the Busan International Film Festival was held from Oct. 6 to 15.

Padma Shri Aparna Sen is one of India’s most celebrated actor-writer-directors. She is the daughter of the renowned film historian, critic and filmmaker Chidananda Dasgupta. She has won several national and international honors over the years and served on many festival juries.