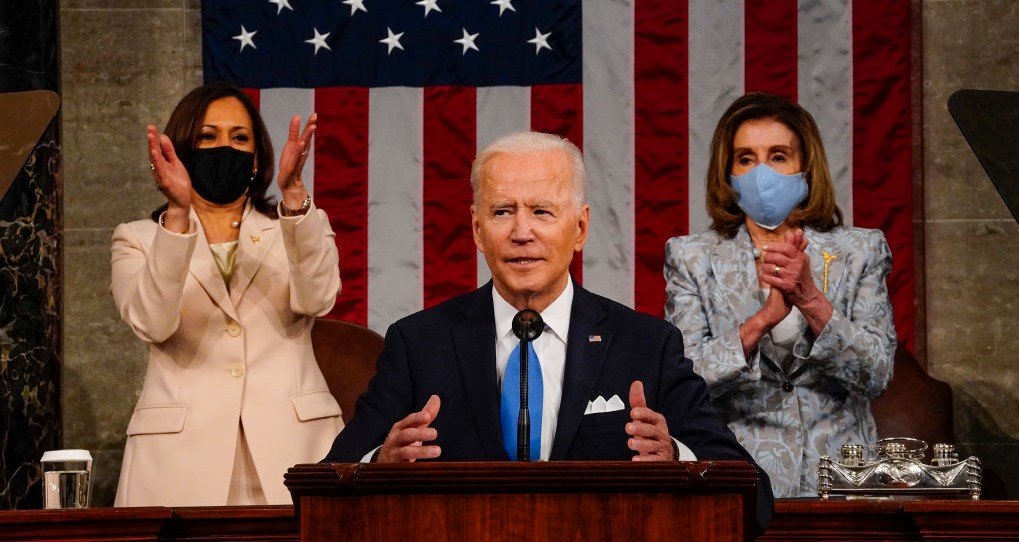 President Joe Biden addresses a joint session of Congress, with Vice President Kamala Harris and House Speaker Nancy Pelosi (D-CA) on the dais behind him on April 28, 2021 in Washington, D.C. On the eve of his 100th day in office, Biden spoke about his plan to revive America’s economy and health as it continues to recover from a devastating pandemic. (Melina Mara-Pool/Getty Images)

NEW YORK – U.S. President Joe Biden has said that as a deterrence to conflicts he would maintain a strong presence in the Indo-Pacific, an area where China is asserting itself aggressively.

China loomed large in Biden’s address to the joint session of Congress April 28, as he made the fast-developing nation the economic and strategic threat to the U.S.

“We’re in a competition with China and other countries to win the 21st century. We have to do more than just build back. We have to build back better,” he said.

Biden said that he has told “President Xi (Jinping) that we will maintain a strong military presence in the Indo-Pacific just as we do with NATO in Europe – not to start conflict, but to prevent conflict.”

He added, “In my discussion with President Xi, I told him that we welcome the competition – and that we are not looking for conflict. But I made absolutely clear that I will defend American interests across the board.”

In his speech on his 99th day in office, Biden presented his report card on progress in achieving the targets he had set for the first 100 days and his multi-trillion-dollar plans for infrastructure, jobs, education, economy and families.

He said, “America is on the move again” after the worst pandemic in a century, the worst economic crisis since the Great Depression and the worst attack on democracy — a reference to the attack on Congress by supporters of former President Donald Trump on January 6.

The hour-long speech was crafted by his Indian American speechwriter Vinay Reddy, who holds the title of director of speechwriting. Since he has not been in office for a year, the speech took the place of the traditional State of the Union address.

As he began his speech with Vice President Kamala Harris and House of Representatives Speaker Nancy Pelosi behind him on the podium, he noted that he was the first president to have to address the holders of both offices as “Madame.”

For the first time, the speaker and the senate president are both women.

The COVID-19 epidemic hollowed out the House chamber where Biden delivered the annual address. Only about 200 people, including the spouses of the president and vice president, were there socially distanced and masked.

Absent were the guests who add color to the speech and get called upon during the speech by presidents.

Missing was also drama like that of Pelosi angrily ripping up a copy of former President Donald Trump’s speech at the podium.

Biden brought up the specter of China several times to spur his agenda.

“China and other countries are closing in fast” in technology and “we’re falling behind in that competition,” he warned, as he called for increasing allocations for research and development.

He said that the investments he proposed across a range of fields “also advance a foreign policy that benefits the middle class.”

“That means making sure every nation plays by the same rules in the global economy, including China,” he explained.

“America will stand up to unfair trade practices that undercut American workers and industries, like subsidies for state-owned enterprises and the theft of American technologies and intellectual property,” he added.

Biden emphasized his vision of the U.S. being the leader of the world.

“We have to show not just that we are back, but that we are here to stay” as the world’s leading nation, he said.

But he added, “And that we aren’t going it alone – we’re going to be leading with our allies” because “no one nation can deal with all the crises of our time alone.”

He asked why blades for wind turbines can’t be made in Pittsburgh and not Beijing or American workers can’t lead the world in making electric vehicles.

“American tax dollars are going to be used to buy American products made in America that create American jobs,” he declared. “That is what it is supposed to be and would be in this administration.”

“I have made it clear to all my cabinet people their ability to give exemptions has been strenuously limited. It will be American products,” he added.

To pay for his ambitious $1.8 trillion Families Plan – which has education, healthcare and other social programs – and the more than $2 trillion Jobs Plan – which focuses on infrastructure development and climate resilience – as well as the $1.9 trillion COVID rescue plan, he said that he would take the tax rate on the wealthiest back to as much as 39.6 percent, but would not increase the tax burden on the rest.

He said that he would also crack down on tax evasion and hiding money in accounts abroad.

He pitched proposals for stricter gun control, raising the minimum wage to $15 per hour and the creation of an Advanced Research Project Agency.