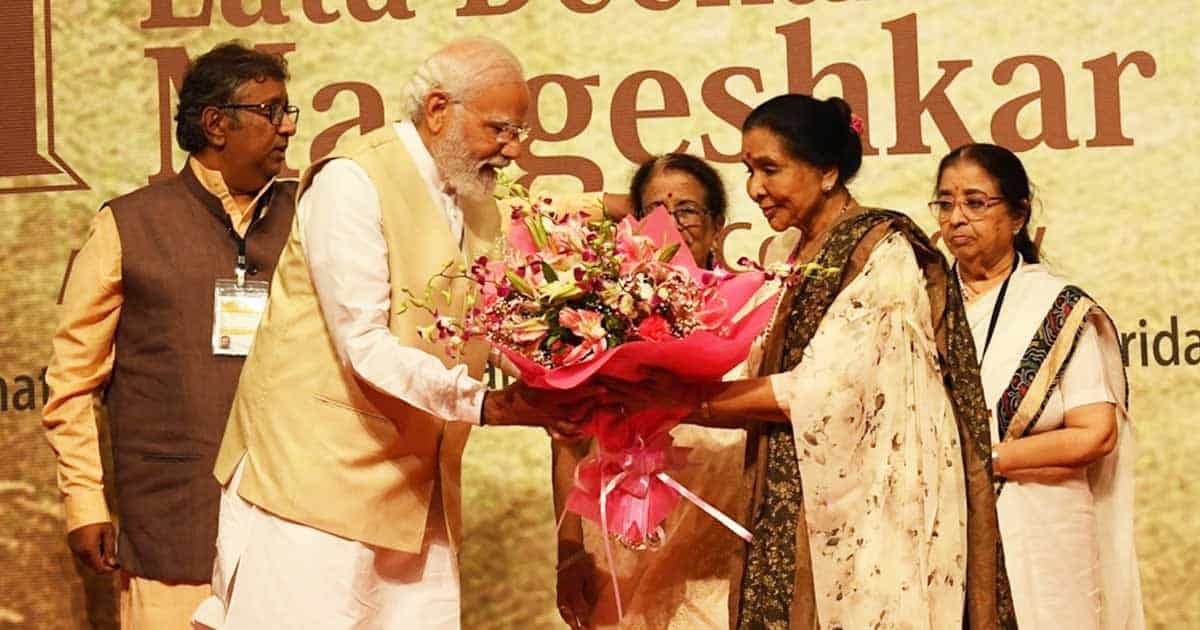 MUMBAI (IANS) Asha Bhosle on April 24 regaled Prime Minister Narendra Modi and a distinguished audiences with some playful, oft tongue-in-cheek yet delightful insights into the life and times of her elder sister, the late Lata Mangeshkar.

The occasion was the conferment of the 1st ‘Lata Deenanath Mangeshkar Award’ to Modi, who occupied first row seat in the audience, got up to walk up on to the stage and humbly accepted the award from the country’s numero uno musical clan.

Later, the master of ceremonies Harish Bhimani revealed how Lata Didi acknowledged that though she seemed to grab all the attention, her younger sibling Asha was an equally formidable singer in the country, and was the doting apple of the eye of her father, Master Deenanath Mangeshkar.

Asha broke down momentarily saying each year the family gathered on this day for the Master Deenanath Mangeshkar Awards function, and today was their beloved father’s 80th death anniversary, and even Lata Didi recently completed 80 years of her trailblazer singing career in the Indian film industry.

“I never imagined that a day would come when I have to stand and speak about her like this,” said Asha, wiping her eyes and quickly regaining her composure.

Recalling an incident when she was barely 5 years old, she said Lata always used to say that drinking the water washed off the parents’ feet is the greatest blessing.

“To prove her point, one day, when their parents slept at home, Lata Didi poured some water on their feet, collected some and drank it from her palms and asked me to follow suit. Till this day, the blessings of that incident – which may sound unbelievable – is in our souls. That was the kind of parental devotion Lata Didi had and taught us,” said Asha amidst applause.

As children, the five siblings – Lata, Asha, Usha, Meena, and brother Hridaynath – used to play ‘gilli-danda’ and other games on the streets of Kolhapur, yet Lata remained ever-dedicated to her work which she started when she was barely in her teens.

“My sister had Saraswati in her voice, was very sharp with a mind like Chanakya, she could think long into the future, knew when to keep her mouth shut and always used to chide me for doing ‘badbadd badbadd’ (chatter), and I used to dote her, always listen to her, and she knew well how to get what she wanted,” Asha said with a smile.

In the olden days, the gramophone companies only used to credit the film actors-actresses, but not the playback singer who actually sang the songs and Lata was disturbed by the trend, but she kept mum, saying “this is not the right time”, she said.

When she was in her late teens, Lata was made, by Khemchand Prakash, sing the evergreen number “Aayega, Aayega Aanewala” for India’s first horror film, “Mahal” , starring Ashok Kumar and Madhubala.

The song proved to be a superhit and Lata Didi had “arrived” in a big way in the film industry, and that’s when she demanded credits in the name of “Lata Mangeshkar” on the gramophone records of the song, Asha said.

“There was much opposition from the aghast producer-directors, but when she gently threatened to stop singing for them, they relented, gave her the credits, and that started the trend with all singers subsequently getting acknowledged for their talent.”

Later, with her soft-and-sweet ‘arm-twisting’ tactics, Lata insisted on the singers’ names featuring before the music directors in the credits, to which also they bowed fearing the sisters Lata-Asha would stop singing for them, even to a legend like Naushad Ali, who composed memorable music for “Baiju Bawraa and “Mughale-E-Azam”.

In a similar manner, Lata wrested out ‘royalties’ for all the singers also, arguing how the producers and the music companies made lakhs and crores of rupees from the singers whom they paid a paltry Rs 500-Rs 1,000, remembered Asha with a smile.

“Invited for her first overseas concert in London, Lata Didi, in her characteristic soft style made it clear she would attend only if it was held at the Royal Albert Hall (opened in 1871), but the horrified organisers said ‘it is not possible since it’s only for the whites’.

“Lata Didi politely but flatly declined to oblige them, the organisers rushed back to somehow get it arranged and she finally sang at the famed auditorium in 1974, and with its massive 5,272 seating capacity, virtually bringing the roof down”, and later even I performed at the Royal Albert Hall.

“Lata Didi was very attached to her family, all of us sisters-brother since she had supported us from 1942, when our father passed away. She was fiercely fond of the family name ‘Mangeshkar’ and made it like a daunting wall to safeguard our interests,” Asha added.

She revealed how, like a family head, Lata would often act rough to discipline her siblings, grab their hair, and they too would pull her plaits (choti) and she would run!

“At times she would shout at us and our mother (Shevanti) would chide her to lower her volume or she would become hoary and she retaliated by screaming even louder,” said Asha of those golden days.

Starting with her teen days, Lata Didi remained dedicated to her work and Asha reminisced when once she was suffering from 104 degrees fever, but insisted on going to perform her difficult role of a ‘fairy’ hanging from the ceiling at a local theatre, and that commitment remained till the very end, evoking another huge round of applause.