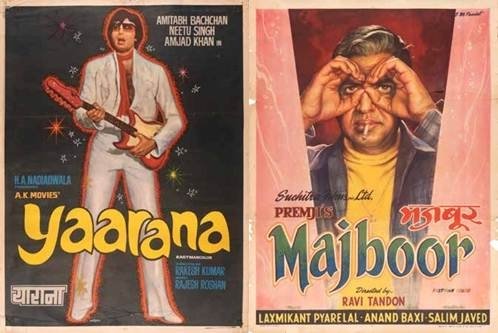 Exactly 20 years after the groundbreaking The ABC Series, which introduced and established a credible financial market and respectability for Indian film publicity material and memorabilia, this collection of rare first-release original film posters from India’s vast cinematic history, includes many designs that are still not available on the global internet.

Various live events and exhibitions will be held in Mumbai and Delhi in the coming months to pay tribute to many Indian film legends and superstars, including Satyajit Ray, Dilip Kumar, Bimal Roy, Dharmendra, Rajesh Khanna, SuaraBanu, and PamartStudio’s.

Little will change unless the Indian film community takes a greater responsibility for preserving and reviving our paper-based cinematic heritage. Aamir Khan, Shah Rukh Khan, Anil Kapoor, Anupam Kher, Dia Mirza, and a few others have previously purchased Osian’s auctions, but an irreversible change requires a much larger and collected interest. “We hope you will take this delicate art form to the next financial level,” Ambassador (Retd.) Niranjan Desai, Chief Spokesperson-deRivaz & Ives, stated.

The auction is to be held online on www.derivaz-ives.com on Apr.8 and 9.