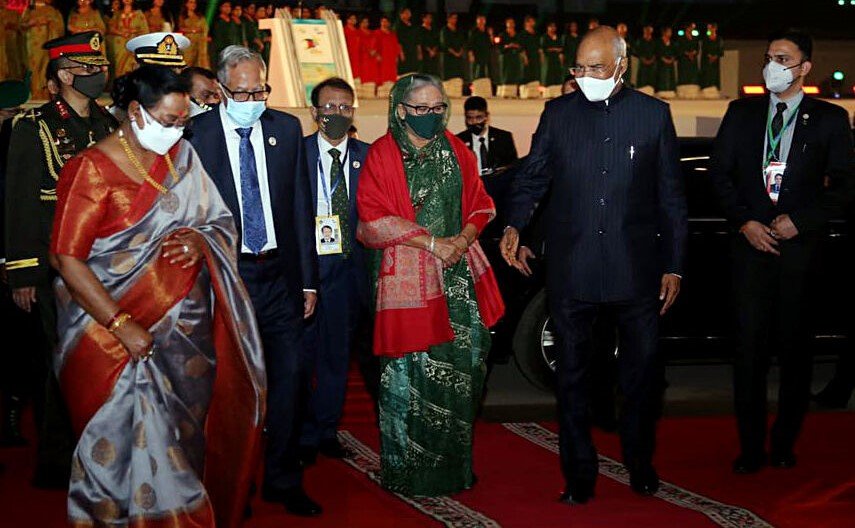 p>DHAKA, Bangladesh (AP) — Bangladesh on Dec. 16 marked 50 years of victory over Pakistan in a bloody war for independence by hosting a military parade with the Indian president as a guest of honor.

On Dec. 16, 1971, Pakistani soldiers surrendered to a joint India-Bangladesh force, formally making Bangladesh a new nation under the leadership of independence leader Sheikh Mujibur Rahman, the father of current Prime Minister Sheikh Hasina. The war began on March 26, and continued for nine months before victory was declared in December, aided by India under Prime Minister Indira Gandhi.

Thursday’s celebrations were attended by Indian President Ram Nath Kovind, who was on a two-day visit to the Muslim-majority country.

Arindam Bagchi, a spokesman for the Indian Ministry of External Affairs, said the two leaders discussed issues of interest, including connectivity and trade, cooperation in fight against COVID-19 and development partnerships.

“In 10 years, we will see very changed and different countries. We are looking at green technologies, renewables in this era of climate change to create employment, IT and digital platforms, startups,” said Indian Foreign Secretary Harsh Vardhan Shringla

IANS adds from Dhaka: Bangladesh on Thursday celebrated its Golden Jubilee of Independence with a Victory Day parade in which President M. Abdul Hamid and his Indian counterpart Ram Nath Kovind were present along with Prime Minister Sheikh Hasina.

Hasina, on “this glorious day of the Bengali nation,” administered an oath to the nation to build the country as a non-communal, developed, prosperous “Sonar Bangla” imbued with the ideology of the Father of the Nation, Bangabandhu Sheikh Mujibur Rahman.

“On the occasion of the Golden Jubilee of the independence and the Victory Day in the Mujib Year, I take oath in a glowing voice that I will not let the blood of the martyrs go in vain, I will love the country, I will use all my strength for the overall welfare of the people of the country,” Sheikh Hasina said while taking and administering the oath, requesting the people of the country to join her vow afresh.

Kovind was the lone foreign head of state to join the celebrations. Dhaka rolled out a red carpet as he arrived on Wednesday on a three-day visit along with his wife and daughter, and a delegation.

Military personnel from India, Russia, and Bhutan also joined the parade, the first-ever participation of foreign troops in the Victory Day ceremony since Bangladesh’s independence, alongside the country’s forces.

The contingents of the three countries took part in the march past while their own military music bands and officers led the troops and saluted the Bangladesh President.

The U.S. and Mexico also sent military observer groups which too took part in the parade.

Twenty-three contingents of Bangladesh’s army, navy, air force and paramilitary units, as well as non-military and utility services and ministries, joined the parade.

The armed forces also displayed their defense hardware and weaponry at the ceremony at the National Parade Square alongside the march past and the flypast, when the fighter jets and helicopters displayed their performances in the air.