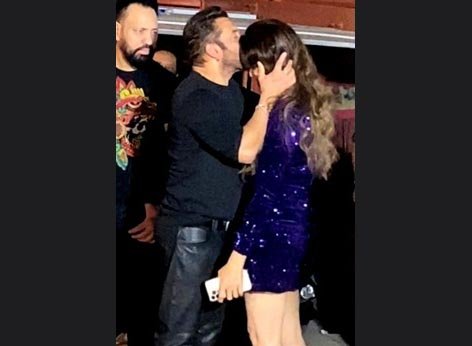 MUMBAI, (IANS) – It’s Bollywood superstar Salman Khan’s birthday on December 27 and his fans can’t keep calm looking at the pictures from the midnight bash hosted jointly by the ‘Tiger 3’ actor along with his niece Ayat Khan Sharma, who shares her birthday with him.

But one person who caught everyone’s attention at the event was Salman’s ex-flame Sangeeta Bijlani.

One video from the birthday party has been going viral on the Internet. As she prepares to leave, Salman hugs the former actress and kisses her forehead and bids her adieu with folded hands in gratitude.

While Salman is known for his relationships with many women, his and Sangeeta’s relationship was much publicized in the media, the two dated for almost a decade and were set to tie the knot – even the wedding cards were printed.

During his appearance on Koffee With Karan, Salman had said, “There was a time that I really wanted to get married and then it just didn’t work out. I have always come so close. People have got cold feet. ‘Theek hai, boyfriend, isko zindagi bhar jhelna padega kya (They think I am a good boyfriend but it’s difficult to tolerate me for the rest of their lives).’ With Sangeeta, even the cards and all were printed.” Sangeeta eventually married and divorced former cricketer and skipper of the Indian cricket team Mohammad Azharuddin.

Salman’s fans gathered in large numbers outside his Galaxy residence to catch a glimpse of the superstar’. After waiting for a while to see him as soon as he stepped out onto the balcony to wave the officers struggled to control the crowd despite the extensive security. They even performed a lathicharge to control the crowd.

The actor along with his father Salim Khan greeted the fans standing outside Galaxy apartment.